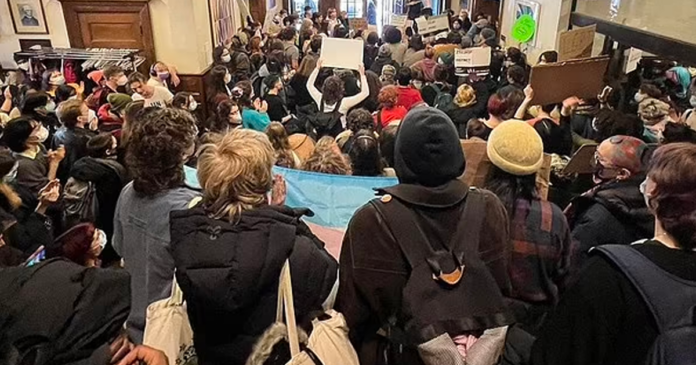 The scholar also told True North that he is worried about the future of debate in academia amid a disregard for free speech by left-wing students and universities.

Wintemute was set to give a talk at McGill titled The Sex vs. Gender (Identity) Debate In the United Kingdom and the Divorce of LGB from T last Tuesday. The event was hosted by McGill’s Centre for Human Rights and Legal Pluralism.

Prior to the event taking place, trans activists penned an open letter condemning it. They claimed Wintemute, who is gay, is “anti-trans” and that McGill was “actively contributing to the genocide of trans people across the world” by hosting him.

On the day of the seminar, protestors stormed into the room, unplugged a projector and threw flour at Wintemute, who was escorted out of the room and sought refuge in the dean’s office.

Wintemute says activists were shouting “f*** your system!  f*** your hate! Trans rights are not up for debate!” Footage provided to True North by Wintemute shows protestors shouting “get out,” “f*** off,” “the people united will never be defeated” and a person saying “you’re erasing my existence”

“They were trying to drown me out in the seminar room and then eventually they started pushing on the door, and they burst in, and they shut down the seminar,” Wintemute said in an interview with True North. “It was horribly anti-democratic.”

The professor added that the storming of his seminar “felt like a small version” of the events of January 6, 2021 at the U.S. Capitol Building in Washington D.C.

“If you try to make the slightest comment or criticism about their demands, they shout ‘genocide’,” says of trans activists. “They’re not willing to discuss anything.”

Wintemute believes what spurs the extreme reaction and protests is that “at the root of it is some insecurity about their demands”. He says that activists may know they don’t always have the arguments to back up what they advocate for. “They get very angry when someone challenges them.”

Wintemute told True North his gay rights activism began after he came out to his boss while working as a lawyer in 1985. He later became a scholar and published a doctoral thesis in 1997 titled Sexual Orientation and Human Rights.

In 2021, Wintemute joined the LGB Alliance, a U.K. group which, according to its website, “exists to provide support, advice, information and community to men and women who are same-sex attracted.” The LGB Alliance has been accused of transphobia and hate due to its criticism of the transgender activist agenda.

Wintemute refuted leftist claims made about the LGB Alliance, noting that the organization supports transgender rights, just not extreme demands from activists. He says that it’s trans activists who have been hateful towards the LGB alliance.

“We agree on most issues, but we disagree on some. And that’s considered treasonous,” Wintemute says. “The transgender rights movement seeks to severely punish the LGB Alliance by falsely labeling the organization as an anti-trans hate group.”

The professor told True North he believes that “the LGBT coalition was a mistake from day one”, and came to be due to sympathy from the lesbian, gay and bisexual community. He says the acronym makes as much sense as LGBW, with W being for people in wheelchairs.

Wintemute also shared his concerns regarding issues facing biological women, saying he has sympathy for women amid them losing female-only spaces like competitive sports and prisons. He believes that it’s unfair that women are accused of transphobia when they speak out about these concerns.

Wintemute’s seminar being shut down is just the latest case of censorship on campuses, and the professor believes there is good reason to worry about the future of debate in academia. He noted that “pressure on freedom of expression tends to come from the left-wing students and from the universities trying to take the easiest path of least resistance”.

“Universities have become corporations,” he says, arguing they are more concerned about their corporate brand and reputation than they are about principles like freedom of expression.

Wintemute says he’s received support from women across Canada following the storming and shutting down of his seminar.

“I try to speak up because I know many women are afraid to speak. And you saw the reaction on Tuesday.”