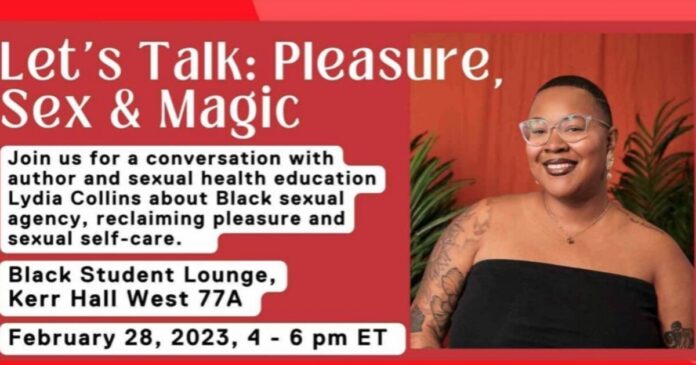 “Join us for a conversation with author and sexual health educator Lydia Collins as we discuss Black sexual agency,” reads the event’s description on TMU’s website.

TMU’s website says the “Pleasure, Sex & Magic” event is “a space for Black community members solely”. It will be held in the university’s racially segregated “Black Student Lounge”, which TMU says provides “Black-Identified students with a safe and culturally relevant space on campus.” When signing up, attendees must confirm that they are black students.

Collins is described on TMU’s website as an “Author, Educator, and Content Creator who brings an accessible, anti-racist, intersectional approach to sexual health education.” She minored in Women and Gender Studies at Brock University.

In a 2022 interview with London radio station 106.9 The X on tackling anti-Black racism and sexual health, Collins explained that she was not seeing people “diving into larger conversations around the fact that race and racism needs to be a key component of sexual consent education.”

“Anti-Blackness is such a big topic that kind of permeates the sex lives and romantic lives of Black people. So why aren’t we talking about it in the context of sex and romantic relationships?” she asked.

Collins described “Decolonial sexual health education” in an essay she wrote, explaining that “[i]t translates to moving past the idea that white, western ideals of sex and sexuality are the default, and instead, validates the experiences, practices, and knowledge from those who are most affected by poor sexual health outcomes.”

Collins also wrote a blog post in 2021 titled “I can’t put a condom on racism.”

The event is scheduled for Feb. 28 and is hosted by TMU Consent Comes First, the Tri-Mentoring program, the Centre For Women and Trans People as well as the Toronto Metropolitan Student’s Union.

“Let’s Talk: Pleasure, Sex & Magic with Lydia Collins”  is not the only racially segregated event planned at TMU in February, which is Black History Month.

Another event titled “We Heal Together Table Talk: Black Community Healing” is scheduled for Feb. 15. The event is a launch of a journal and colouring book.

True North reached out to the organizer of both events as well as to Collins and TMU for comment, but did not receive a response prior to deadline.