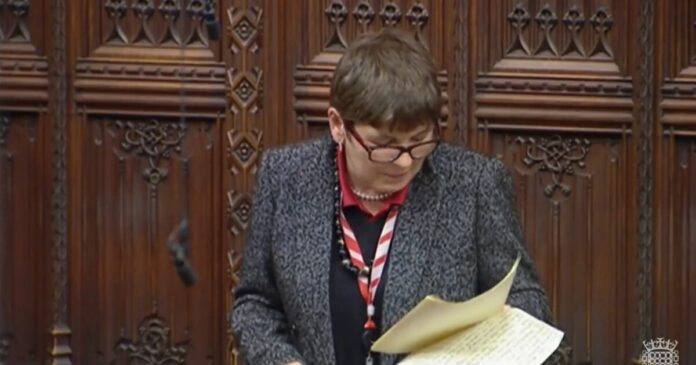 Prime Minister Justin Trudeau’s decision to use the Emergencies Act to freeze the bank accounts of Freedom Convoy protesters garnered a mention as a “shocking” act of censorship in the UK House of Lords last Tuesday.

While discussing PayPal’s recent decision to restrict services for people associated with anti-lockdown and Covid-19 vaccine views, Baroness Claire Fox of Buckley said that it reminded her of Trudeau’s crackdown last February.

“That was shocking, but at least it was clearly a political act. The problem when payment process organizations defund based on content is that they are often evasive and opaque about who it is targeted and why.”

Last year the Trudeau government invoked the Emergencies Act for the first time ever in response to protesters opposed to federal Covid-19 vaccine mandates setting up camp in Ottawa. The legislation gave police authorities powers to request financial institutions freeze the funds of Freedom Convoy organizers and supporters.

The move was condemned both in Canada and abroad. On Feb. 15, 2022, UK MP Marcus Fysh accused the Canadian government of resorting to “authoritarian measures” over the move.

“I am writing today to the Foreign Secretary to ask her what the UK is doing to discourage Canada from arbitrary & authoritarian measures against Canadian residents & their rights. We should do what we can to help our good friends there find a better way,” tweeted Fysh.

“Although many questions about our covid response need to be answered, the UK is by no means the worst offender,” said Kruger

“We are not Canada, New Zealand or China—places where Governments think they can exterminate covid by depriving their population of the most basic civil liberties.”

In Nov. 2022 the Public Order Emergency Commission wrapped up its hearings to determine whether Trudeau’s use of the law was justified under the precepts of the Act. It is expected to deliver its findings by Feb. 20.