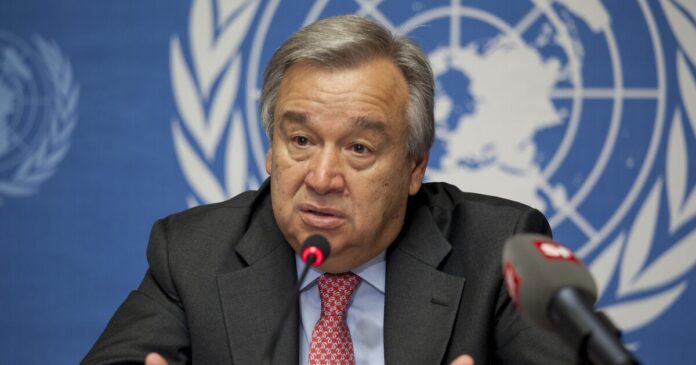 United Nations Secretary-General Antonio Guterres delved into a fear-mongering tirade about certain death as a result of climate change during a special address at the World Economic Forum (WEF) on Wednesday.

“We are flirting with climate disaster. Every week brings a new climate horror story. Greenhouse gas emissions are at record levels and growing. The commitment to limit global temperature rise to 1.5 degrees is nearly going up in smoke. Without further action, we are headed to a 2.8 degree increase and the consequences, as we all know, would be devastating,” said Guterres.

“For several parts of our planet it would be inevitable and for many, it would mean a death sentence.”

During his remarks, Guterres also accused the oil and gas industry of peddling a “big lie” for seeking to expand operations during an uptick in global demand.

“Some in big oil peddle the big lie. And like the tobacco industry, those responsible must be held to account. Today, fossil fuel producers and their enablers are still racing to expand production,” said Guterres.

“Knowing full-well that this business model is inconsistent with human survival. Now, this insanity belongs in science fiction, yet we know the ecosystem meltdown is cold, hard scientific facts.”

Critics of the WEF have accused the organization and its adherents of requiring sacrifices from ordinary people while they continue to enjoy lavish lifestyles jet-setting around the world.

“Davos has a perfectly adequate railway station, still these people can’t even be bothered to take the train for a trip as short as 21 km. Do we really believe that these are the people to solve the problems the world faces?”

The group’s research shows that 1,040 private jets flew in and out of the Swiss luxury ski resort town.

Women pledging not to have children due to climate change is...