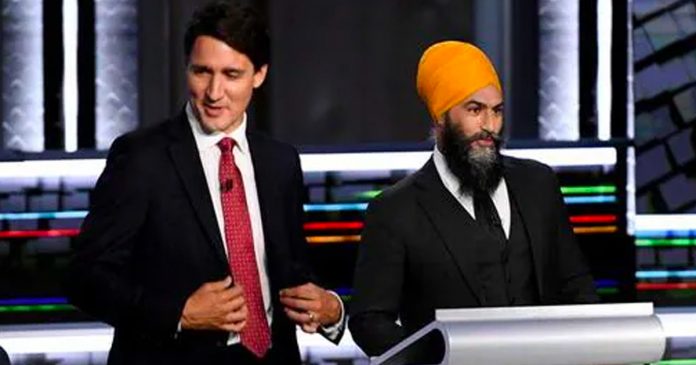 He huffs and he puffs — demanding universal pharmacare funded by the taxpayer, and saying that any province pushing for more privatized health care be banned from the annual big money transfer that struggles to fund  the majority of present-day health care.

Trudeau’s house is pretty weak. He heads a sad-sack minority, and he’s getting a bit long in the tooth. He now gets booed in public settings.

But no matter how much Singh huffs and puffs, he rattles nothing of importance in Trudeau’s house — not even the PM’s nerves, which must be a disappointment.

Soon after Ontario Premier Doug Ford said he was opening the door to more private companies to use the proceeds from the country’s universal health care, Singh told reporters on Parliament Hill Thursday that “one of those conditions should be that public money from the federal government should not be going towards enriching private companies.

“And any new money that we invest in the health-care system shouldn’t be going towards private delivery.”

He also indicated his party would consider pulling support of the Liberals if his demands were not met.

“We really believe that health care has to remain public. This is one of our major priorities,” Singh said.

“Every option is on the table. If the government’s not willing to defend a public system, we’ll always use all options.”

Trudeau did not shake in his boots. The House of Commons is in recess and is not scheduled to return until Jan. 30.

Instead he busies himself with private meetings away from prying microphones. Ergo, no harm no foul.

But he did extend a quote to his fan club at the Toronto Star.

“I recognize we’re in a moment of crisis right now, but we need to build a stronger system for the future, and that’s where my focus is,” Trudeau told the newspaper. “I’m not going to comment on what Doug’s trying to do on this one … We’re supposed to say a certain amount of innovation should be good as long as they’re abiding by the Canada Health Act.”

In other words, he was not nixing Ford’s idea.

The NDP and the Liberals announced a deal last year in which the NDP agreed to support the minority Liberals through to 2025 in exchange for action on a series of NDP priorities, including passing a Canada Pharmacare Act by the end of 2023.

Singh said that is “the framework necessary to move forward with universal public pharmacare. And that’s something that we fought for in the agreement we negotiated, and we expect it to be there.”

The office of Health Minister Jean-Yves Duclos also brought up the Canada Health Act in a Thursday statement, saying the legislation “ensures that all Canadians have reasonable access to medically necessary insured services based on need and not the ability to pay.”

“Our government will continue to work with provinces and territories to make sure our investments are used in the best interest of health workers and patients, and in a way that (protects) the principles of the Canada Health Act.”

The statement from Duclos’ office also said the government is “taking significant steps” toward tabling a Canada Pharmacare Act this year.

“We remain committed and continue engaging provinces and territories towards a national universal pharmacare program,” it said.

Canada technically does not have a two-tiered health care system. However, some services in Canada are covered not by government provided health care but instead by the private sector—dentistry, laser eye surgery, most cosmetic plastic surgeries. While most basic essential services are provided by the public health care systems, which are administered by the country’s 13 provinces and territories.

Six of Canada’s ten provinces used to ban private insurance for publicly insured services to inhibit queue jumping and to preserve fairness in the health care system. In 2005, the Supreme Court ruled that in Quebec, such bans are unconstitutional if the waiting period for care is excessively long. However, this ruling only applies within the Province of Quebec.

A second court challenge to determine whether the prohibition of private parallel health care violates the patients’ right to life, liberty, and security under Section 7 of the Canadian Charter of Rights and Freedoms was defeated by the Supreme Court of British Columbia  in 2020.

In the meantime, the huffing and puffing of Jagmeet Singh will no doubt continue unabated, perhaps rattling an old window or two for political optics, but that’s about it.

There is no easy way out.