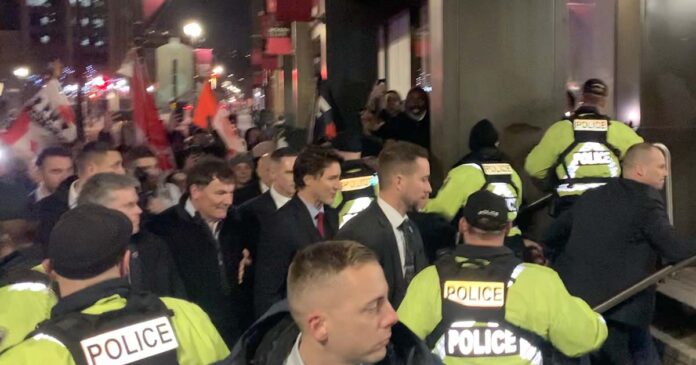 Prime Minister Justin Trudeau came face-to-face with hundreds of protesters on Tuesday night in Hamilton, Ontario when his security team escorted him across the street from the restaurant he and members of his cabinet had gathered at for dinner.

The federal cabinet is currently in Hamilton for a multi-day retreat.

A large group of protesters quickly assembled outside the Bread Bar, a downtown Hamilton restaurant, when they became aware that Trudeau and his cabinet were all inside.

Many of the protesters were carrying Canadian flags, with some carrying the profanity-laden “F*** Trudeau” flag. A small group even brought out an inflatable sheep wearing a mask, which read, “99.8% survival rate”.

Just before 9pmET on Tuesday, Trudeau and his security detail walked out the front entrance of the restaurant and cross the street towards the Sheraton hotel.

True North was on the ground to capture the scene.

Protesters can be heard calling the Prime Minister a “tyrant” and a “traitor”.

Trudeau and Intergovernmental Affairs Minister Dominic LeBlanc were spotted by True North cameras on Tuesday, walking underneath Jackson Square mall on their way to the Bread Bar restaurant.

One year ago this week, truckers began their convoy across the country in protest of vaccine mandates placed on cross-border truckers. The protest would evolve into what is now known as The Freedom Convoy – a month-long protest that would place the Canadian people and the pandemic policies of the government on the front pages of the world’s newspapers.

After almost a month of entrenched, prolonged protest in downtown Ottawa, Trudeau made the controversial decision to invoke the never-before-used Emergencies Act to quash the Convoy.