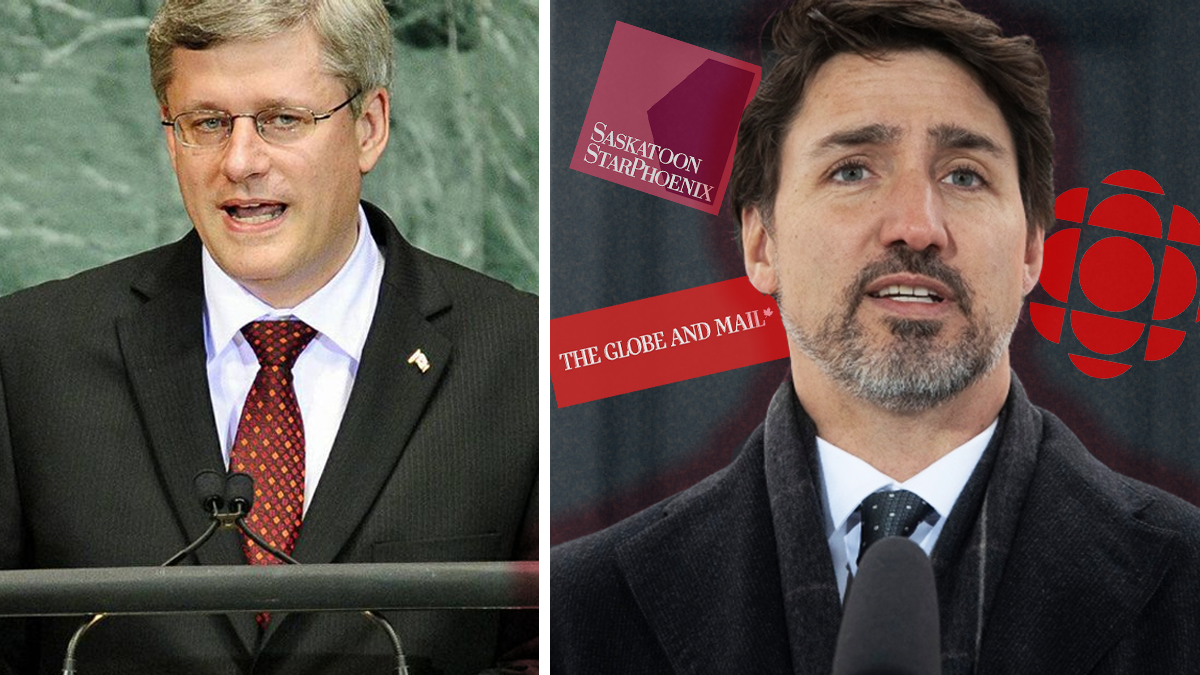 Former prime minister Stephen Harper felt the wrath of the Canadian mainstream media after failing to secure a UN Security Council spot in 2010. But as announced on Wednesday, Prime Minister Justin Trudeau has now also lost the bid, yet mainstream media are letting him off the hook.

Comparing the mainstream media’s reaction to Harper’s bid in 2010 with Trudeau’s latest attempt shows a stark difference in attitudes despite the fact that the Liberals secured far fewer votes than the Conservatives did while in power.

Articles by the Globe and Mail, the CBC and the Saskatoon StarPhoenix all lambasted Harper shortly after he failed to secure a Security Council seat in 2010.

One news article in the Globe and Mail titled “Security Council rejection a deep embarrassment for Harper” called the loss a “humiliating rejection.”

In comparison, on the same day Trudeau lost the bid, the same publication made no reference to the prime minister in their headline. Instead of pinning the failure on Trudeau, the Globe simply wrote: “Canada loses UN Security Council election to Ireland, Norway.”

“Despite the loss, Mr. Trudeau said Canada will continue to promote its values of peace, freedom, democracy and human rights on the world stage.”

“The fact is that every prime minister who has tried to win a seat for Canada on the UN Security Council has succeeded — except for Stephen Harper,” Ignatieff was quoted as saying in the article.

The CBC aired no such vicious condemnation yesterday or today after Trudeau’s bitter defeat. Instead, the federally-subsidized public broadcaster ran with an article plainly headlined: “Canada loses its bid for seat on UN Security Council.”

“It’s a heavy blow for Prime Minister Justin Trudeau, Foreign Affairs Minister François-Philippe Champagne and other high-level officials who had been reaching out to political leaders around the world in a campaign to secure one of the two available rotating seats,” said the article.

Several other outlets also dragged Harper through the mud while he was prime minister.

Articles once featured in the Saskatoon StarPhoenix and the Guelph Mercury blamed Harper for the defeat. Those very same publications have been relatively silent on Trudeau’s failure.

“Canada was always successful in the past at gaining a seat on the council, primarily due to the personality, principals [sic], policies and actions of its prime ministers,” wrote an op-ed written by Mo Miller.

“In Harperland, nothing is the fault of ‘Da Boss.’ The attempt to blame the loss on Michael Ignatieff was laughed out by almost all media except Fox News and QMI,” said an op-ed by Robert Bandurka.

Meanwhile, an editorial from the Guelph Mercury in 2010 disseminated similar sentiments in an article titled: “Harper is to blame for Canada’s loss at UN.”

“In his insulting actions toward the international community, Harper ensured our loss of the UN Security Council Seat,” wrote Mark Sholdice on 23 October 2010.

To date, neither the Guelph Mercury nor the StarPhoenix have published any similar opinionated condemnations of Prime Minister Justin Trudeau.

During Prime Minister Justin Trudeau’s daily coronavirus briefing on Thursday, only one question was asked in French by TVA’s Raymond Fillion regarding the failed race against Norway and Ireland.