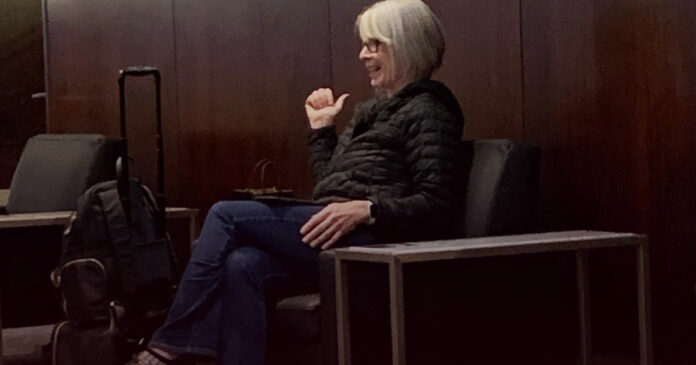 Health Minister Patty Hajdu claims she was still following public health guidelines after she was photographed without a mask at the Toronto Pearson Airport.

On Sunday, a Twitter user posted an image that appears to show Hajdu sitting down and smiling in an airport. No mask is visible anywhere in the image.

Health Canada recommends wearing masks to slow the spread of coronavirus, particularly in crowded public settings such as public transportation. Many provinces, cities and businesses have instituted mandatory mask policies.

According to Toronto Pearson Airport, masks are mandatory for all passengers and staff in the airport at all times.

In a response on Twitter, Hajdu claimed that she was still following the public health guidelines despite going maskless.

“Following public health rules is important to me. I wear my mask at all times at Toronto Pearson, and only take it off to eat or drink, as allowed,” Hajdu wrote.

No food or beverages are visible in the image.

This isn’t the first time the health minister was caught breaking her government’s recommendations.

While Health Canada told the public to avoid unnecessary travel, Hajdu took multiple flights from Ottawa to her home in Thunder Bay.

Hajdu told Canadians not to visit family over the Easter long weekend despite flying home that same week.

In July, then-Conservative leader Andrew Scheer was heavily criticized by the media when a similar photo of him not wearing a mask in Toronto Pearson surfaced.