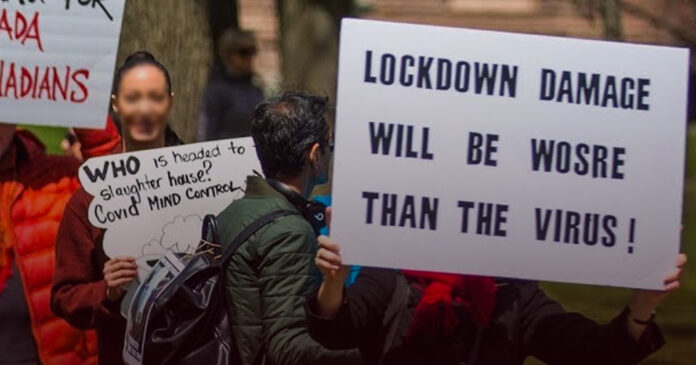 A constitutional rights group is sounding the alarm about the town of Aylmer, Ont.’s request to demand proof of medical exemptions to the government’s order requiring face masks.

Aylmer appears to be digging its heels into its mandatory mask orders days ahead of an anti-mask rally planned in the southwestern Ontario community Nov. 7.

The letter to Ontario’s solicitor general, first reported on by True North, is “ridiculous” and designed to intimidate those seeking to exercise their rights, the Justice Centre for Constitutional Freedoms (JCCF) says.

“The letter…to mandate that people provide proof of their medical exemption, is intrusive and frankly ridiculous,” said JCCF staff lawyer Lisa Bildy. “For one thing, the demonstration is expected to be entirely outdoors, where masks aren’t even required in the first place. Secondly, there is very little evidence that masks do anything at all, beyond providing psychological comfort or discomfort, depending on the wearer.”

Everyone is required to wear a mask indoors at most locations. However, individuals with certain medical conditions are exempt from this mandate and do not presently need to provide proof, as doing so would require unnecessary disclosure of personal information.

Bildy said that granting Aylmer’s request would actually weaken the mask mandate, making it more susceptible to a court challenge.

“To now require proof of an exemption would likely make the masking order overly broad, and not a minimal impairment. It would be more likely to be successfully challenged for discrimination on the grounds of disability, or for interference with peoples’ reasonable expectation of privacy,” she said.

Aylmer’s October 27 letter asks that Ontario Solicitor General Sylvia Jones “reconsider the orders in the context of requiring proof of medical condition for exemption from the donning of face coverings.”

Jones’ office did not respond to a request for comment.

The town’s letter comes on the heels of Aylmer Mayor Mary French preemptively declaring a state of emergency ahead of the anti-mask demonstration, citing “the potential for civil unrest and service disruptions relating to protests and demonstrations regarding COVID-19 directions…”

Organizers with the Nov. 7 Freedom March have said they fully intend to exercise their right to assemble, despite the declaration. A counter-protest is also expected to take place.

Despite the pushback from the police and the city council, rally organizers expect a larger turnout than the last rally held in October, which attracted hundreds of participants.

“There is a huge ground-swell of support, and publicity, for this Saturday’s lawful Public Freedom March, and we’re pleased about that.  We’re calling on anyone who comes out to be peaceful, civil, and polite,” said Terry Neudorf, who is the husband of rally organizer, Kimberly Charlton Neudorf.

“Kimberly has worked with the Aylmer Police and the OPP from the very beginning stages of planning.  And while I don’t know if I would particularly use the word cooperative, they have kept the lines of communication open.  We have to realize that for them, an event like this is also quite unprecedented, and they are probably scrambling to do their job as best they can, and we assume that they’ll do it well.”

Disclosure: Lisa Bildy and the Justice Centre for Constitutional Freedoms are representing True North and its fellow Andrew Lawton at no cost in their litigation against the federal government and the Leaders’ Debates Commission.