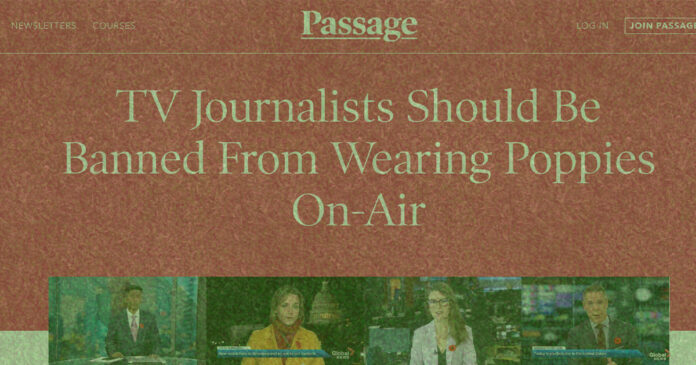 A Canadian journalist is calling on news networks to bar their staff from wearing poppies on-air, suggesting they “glorify war” and represent “overtly political messaging.”

The anti-poppy column was written by Davide Mastracci in the progressive Canadian online publication Passage.

“TV journalists should be banned from wearing poppies on-air,” the article is titled.

In it, Mastracci writes that wearing a poppy proves a journalist is no longer objective, likening the symbol to political buttons or pins.

“So-called objectivity is one of the ostensible cornerstones of modern, corporate journalism, but it’s complete bullshit, and the way poppies are handled is a great example of why,” writes Mastracci.

“So, journalists are on TV every single day wearing a political symbol its trademark owners explicitly state is meant to unite us behind a glorified interpretation of what soldiers do, and yet because this political view just so happens to line up with the dominant ideology in Canada — slack jawed reverence of the military — it’s somehow not a violation of objectivity?”

Mastracci says poppies are “explicitly political symbols” because they are trademarked by the Royal Canadian Legion and “play a prominent role in the self-glorifying military ceremonies throughout the country on Remembrance Day.”

The article comes on the same day Liberal, NDP and Conservative members of parliament unanimously condemned grocery chain Whole Foods for its now-reversed ban on employees weaning poppies at work.

Mastracci has spoken out against the wearing of poppies to commemorate Remembrance Day in the past.

On November 9, 2019 Mastracci tweeted that “wearing a poppy is actively harmful” and that he hoped “they disappear.”

Poppies were officially adopted by the Great War Veteran’s Association in Canada as a Flower of Remembrance on July 5, 1921. Since then, the symbol has become a commemorative way to honour fallen veterans ahead of and on Remembrance Day.