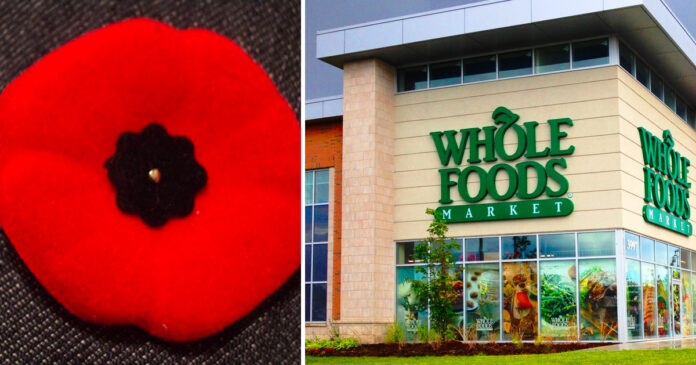 Update: Whole Foods has updated its policy to allow the poppy to be displayed on staff uniforms. In a statement, the grocery chain also noted they would be observing a moment of silence on November 11 and making a monetary donation to the Legion Poppy Fund.

Ontario Premier Doug Ford sent out a follow-up tweet stating, “It should not take legislation to do the right thing.” assuring that this would not happen in Ontario again.

The Whole Foods supermarket chain has told its employees that they are not allowed to wear poppies in the lead-up to Remembrance Day.

For 99 years, Canadians of all walks of life have worn poppies to honour those who fought and died fighting wars on our behalf.

The company policy became public when an anonymous Whole Foods employee in Ottawa told CBC that the symbol had been banned so employees would not be seen “supporting a cause.”

“I was basically told … if they allowed this one particular cause, then it would open up the door so that they would have to allow or consider allowing other causes,” the anonymous employee said.

Whole Foods Market Inc. is a U.S.-based supermarket chain with 14 stores in Canada. Whole Foods has been owned by Amazon since 2017.

In a public statement, Whole Foods claims that by not allowing employees wear a poppy, they were somehow going to be more focused on the job.

“The updated company dress code provides our Team Members with one simplified and unified policy to follow when working in our stores. Like many of our policies, our dress code is in place to ensure that we are prioritizing operational safety and serving our customers by keeping the focus in our stores on selling the highest quality food and fulfilling Whole Foods Market’s purpose of Nourishing People and the Planet,”

Whole Foods added that they will be making a donation to the Royal Canadian Legion.

The Legion, who organizes the poppy campaign, has struggled financially since the pandemic began.

Last year, hockey legend Don Cherry was fired by Sportsnet after he bemoaned the fact no one in Toronto was wearing a poppy. Cherry was accused of being “racist” by activists on social media.