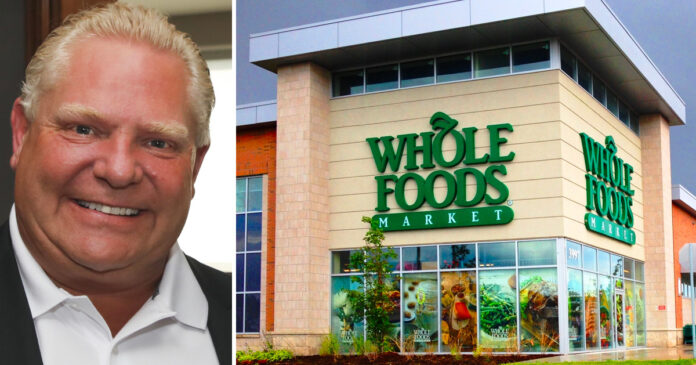 Update: Whole Foods has updated its policy to allow the poppy to be displayed on staff uniforms. In a statement, the grocery chain also noted they would be observing a moment of silence on November 11 and making a monetary donation to the Legion Poppy Fund.

Ontario Premier Doug Ford sent out a follow-up tweet stating, “It should not take legislation to do the right thing.” assuring that this would not happen in Ontario again.

Whole Foods’ decision to ban employees from wearing Remembrance Day poppies has come under fire from Conservative politicians, with one promising legislation that would prohibit the grocery chain’s dress code.

Conservative leader Erin O’Toole condemned the company’s poppy ban as “shameful” and “un-Canadian,” noting the sacrifices of Canadian soldiers is what gives the freedom for “a big American grocery chain to be stupid today.”

“To those of us who have proudly served our country, to those still serving, to the fallen who have paid the ultimate sacrifice – this is not a cause.” said O’Toole, who served in the Canadian Armed Forces prior to entering politics.

In a video recorded on Parliament Hill, O’Toole rebranded the company “Woke Foods,” taking aim at Whole Foods’ characterization of wearing a poppy as indicating support for a political cause.

“The poppy is not a cause – it is a sign of respect,” he said. “Respect for those who sacrificed it all for our today. I’d like Whole Foods to stop trying to be Woke Foods and to do the right thing – show respect. Lest we forget.”

While O’Toole was direct in his condemnation of the Whole Foods poppy ban, other conservative politicians were much more aggressive.

Ontario Premier Doug Ford vowed in a tweet to introduce legislation  prohibiting companies from banning their staff from wearing poppies during Remembrance week.

“It’s disgusting and disgraceful that Whole Foods has banned poppies for their employees. We will always stand with our veterans.” Ford said.

Ford also called on the grocery store chain to apologize and immediately reverse the decision.

“Everyone should wear a poppy. Lest we forget.” Ford said.