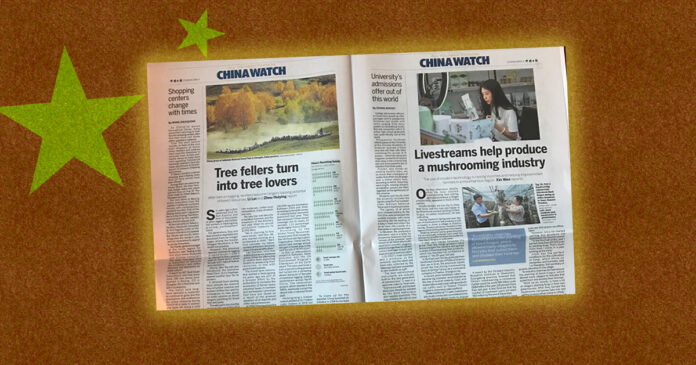 According to a disclosure filed with the US Justice Department, Canada’s Globe and Mail newspaper received $132,046 for a number of advertising campaigns that featured flattering coverage of China.

The Globe and Mail first printed a two-page “China Watch” spread in September 2020. Disclaimers at the bottom of the advertisement announced that the content was “produced by the China Daily and distributed in the Globe and Mail.”

The China Daily is an English-language media outlet owned by the publicity department of the Chinese Communist Party.

In October 2020, the China Daily once again placed advertisements in the Globe and Mail.

The “China Watch” advertorials omit the negative aspects of Beijing’s authoritarian system of governance and instead feature feel-good items such as a Chinese festival dedicated to inclusiveness and a foreign business that sees greater potential in China.

Meanwhile, the People’s Republic of China has been accused of genociding their Uyghur Muslim population and has two Canadian citizens, Michael Spavor and Michael Kovrig, held captive on trumped-up charges of espionage.

The Los Angeles Times, the Washington Post, the Wall Street Journal and the New York Times are among the other North American media outlets that have taken ad money from the Chinese regime.

A recent Sunday edition of the Los Angeles Times included an 8-page insert with the familiar headline “China Watch.”According to a 2020 report, the Chinese Communist Party has spent $20 million over the last decade on bringing Chinese state rhetoric to the Western media.