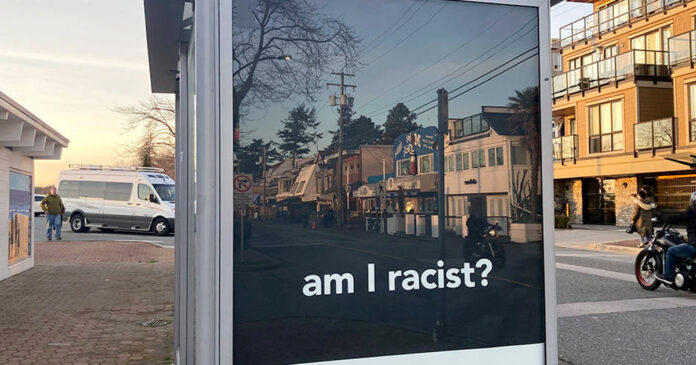 A new billboard campaign in BC is asking Canadians to consider whether they’re racist or not.

The “Am I racist?” billboards, which have appeared in at least 23 communities across the province, are the handiwork of BC Human Rights Commissioner Kasari Govender.

“My office works to identify and eliminate patterns of systemic discrimination in our province. Even working in human rights I’ve had to ask myself this same tough question. We owe it to ourselves and our communities to take a hard look inside and start to examine what stands between us and a more equal province. The time is now to become anti-racist together.”

The billboards, which display plain white text on a black background, ask questions like: “If I say I don’t see skin colour, am I racist?” and “If I want to forget our province’s history, am I racist?”

Govender was appointed to a five-year term as Human Rights Commissioner in September 2019, nearly two decades after the position was dismantled by a prior government. Official records show that Govender is paid nearly $300,000 a year.

In January 2020, Govender was calling on the Canadian government to ignore its own laws and instead obey a United Nations directive to terminate three major resource development projects, including the Trans Mountain Expansion.

“In my lifetime, there has never been a more important time for Canada to demonstrate support for institutions of democracy,” Govender said in a statement.

“I join CERD [Committee on the Elimination of Racial Discrimination] in urging Canada to immediately cease the forced eviction of Wet’suwet’en and Secwepemc peoples, to prohibit the use of lethal weapons, and to guarantee no force will be used against them. This is a matter of fundamental human rights.”

Govender made the statement following an order by the UN committee to halt the project.