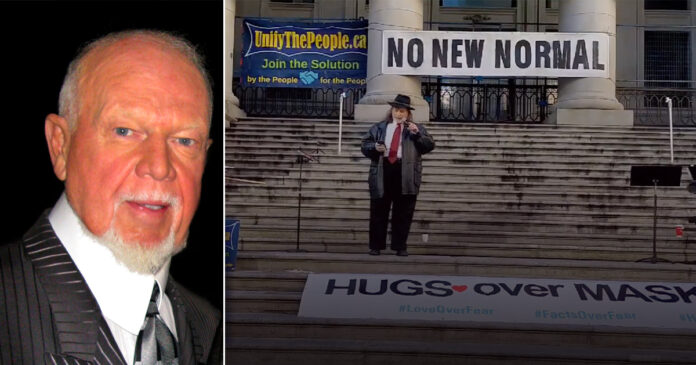 Days after Canadian anthem singer Mark Donnelly was fired by the Canucks for performing at an anti-lockdown rally in Vancouver, former Coach’s Corner host Don Cherry spoke out about the incident.

Cherry told the Toronto Sun that entertainers and public figures must be prepared to handle the backlash that comes with expressing controversial opinions.

“He was becoming a pretty big star. You have to be careful because you can be stealing somebody else’s limelight,” said Cherry.

“When you give your opinion, you better be prepared to pay the price. Going to a ‘no-mask rally’ was not the politically correct thing to do. You have to do what the left media want now. I should know.”

On Saturday, Donnelly attended and sang at a Christmas rally in downtown Vancouver where several hundred people were gathered to protest provincial coronavirus health orders.

As word of his involvement at the rally spread, Canucks owner Francesco Aquilini took to twitter to announce the singer’s firing that very same day.

Last year, Cherry faced a similar situation with his former employer, Sportsnet. Cherry was fired from his decades-long post as the host of Coach’s Corner after he called on people to wear poppies for Remembrance Day.

Cherry was fired by the network for alleged discriminatory and divisive remarks despite clarifications by Cherry to the contrary.

“During the broadcast, he made divisive remarks that do not represent our values or what we stand for” said Sportsnet President Bart Yabsley at the time.