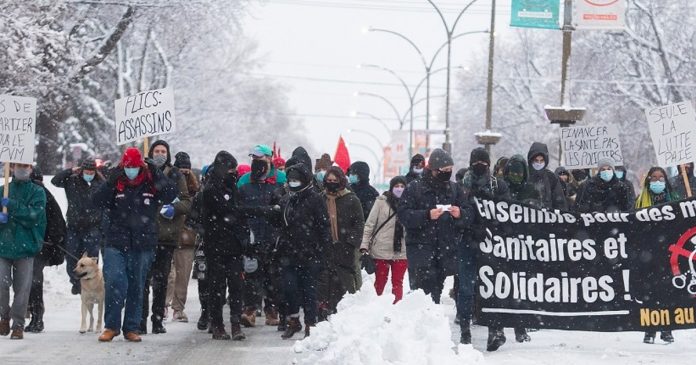 An anti-police group with anarchist links took credit for organizing a protest against government curfews in Montreal over the weekend.

“Thank you all for your presence at yesterday’s protest. We were a hundred people to take to the streets to denounce the imposition of a curfew and to call for solidarity measures to respond to the pandemic,” wrote the group.

“It’s legitimate to attack the police, an institution designed and dedicated to violently suppressing Black people’s freedom, enforcing the theft of native land, and defending those who get rich by exploiting us,” wrote an anonymous author on the website.

“It’s legitimate to loot stores, because everyone should have nice things, and a world that values commercial property over Black lives continues to put people like George Floyd and Regis Korchinski-Paquet in grave danger of premature death.”

Reports of the protest by the mainstream media failed to mention the group’s extremist political ties despite quoting directly from their Facebook posts.

To date, most anti-lockdown protests have been characterized by the media as being attended by religious fundamentalists and conspiracy theorists.

On the day of the protest, the Facebook page for the group also took to sharing content by the Quebec antifa group Montréal Antifasciste. Similarly, the anarchist website Contrepoints recently exposed for publishing instructions on how to sabotage Canadian infrastructure, shared a call to action for the group.

“The radical left must not leave this fight in the hands of the right and its anti-scientific and individualistic discourse. In times of health crisis, we don’t have the luxury of blindly agreeing to repressive and counterproductive measures while contenting ourselves with preventive half measures,” claimed the post.

“In all neighbourhoods, by all means, our voices must be heard. No police solution to the pandemic should be accepted. Let’s resist the authoritarianism in place and to come, and let’s fight against curfew!”