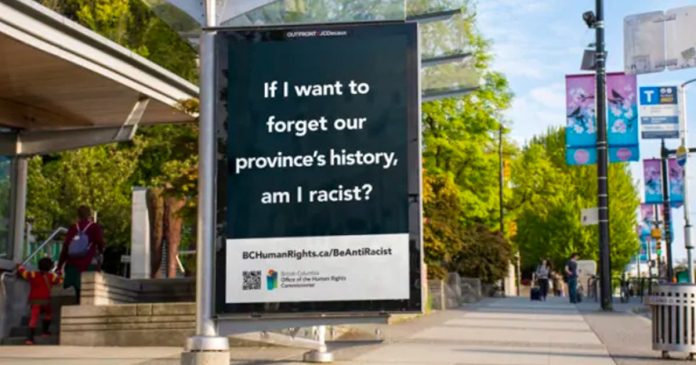 “We have a legislative mandate to provide education to the province of B.C. on anti-racism and anti-discrimination. It is one of our core functions,” the Office’s Acting Director of Communications Elaine O’Connor told True North.

“As such, this project was a strategic priority for our Education and Engagement department, and this campaign comes from dedicated project funding for this work.”

When the initiative first launched in November 2020, billboards asking commuters to consider whether they’re racist or not popped up in at least 23 communities across the province.

Among the other messages included on the plain black posters were questions such as, “If I say I don’t see skin colour, am I racist?” and “If I want to forget our province’s history, am I racist?”

According to O’Connor, the cost estimate included “creative development, social media and traditional ad buys, brokerage and display on transit shelters, buses and billboards in locations across B.C.” for at least two months.

The Office of the Human Rights Commissioner was revived by the province’s ruling NDP party in 2019 after having been scrapped in 2003 for financial reasons.

The Office’s 2019/2020 annual report shows that last year Govender had an operating budget of $2 million and an annual capital budget of $1 million. Beginning in 2021, the office’s operating budget is expected to surpass $5 million per year through until 2023.

According to O’Connor, the billboard campaign did face some challenges including several instances of vandalism but the posters were immediately replaced. As for the public reaction to the messaging, the Office continues to receive input on the campaign.

“BCOHRC received public feedback throughout the campaign, and continues to via email, polling and data. We were impressed with the level of engagement with the campaign and how seriously people grappled with their own thoughts and beliefs,” O’Connor told True North.