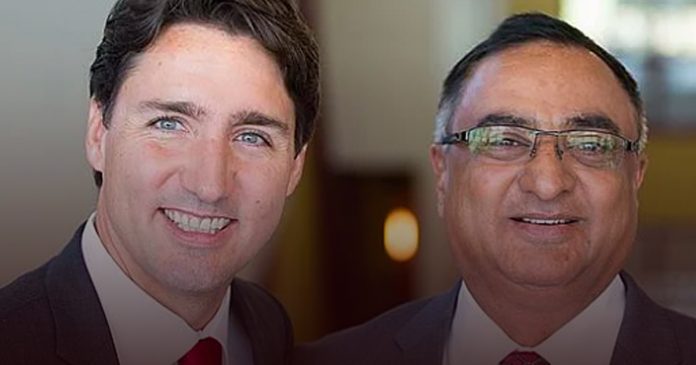 Following the removal of former Liberal MP Ramesh Sangha from the party caucus over allegedly “baseless accusations” against his colleagues, some critics have questioned whether the swift actions were justified.

As originally reported last week, Sangha was kicked out of the party following an interview with a Punjabi-Canadian media outlet in which he said that the Liberal party contains supporters of the Khalistani extremist movement at its highest levels.

True North spoke to Munk Senior Fellow at the Macdonald-Laurier Institute Shuvaloy Majumdar to discuss the MP’s firing and its ramifications for the Liberal government.

“This government appears to, as Mr. Lilley reported, be comfortable kicking out someone for being opposed to extremism, rather than actually being an extremist. And this government has no issue changing the language of professional national security documents for overtly political reasons,” said Majumdar.

In the 2018 Public Report on the Terrorism Threat to Canada, former public safety minister Ralph Goodale had the term “Sikh extremism” removed from the document. References to “Shia” and “Sunni” Islamist extremism were also erased.

Following the Trudeau government’s decision to alter the language around terrorism, a Sikh-Indian politician and the Punjab region’s Chief Minister Amarinder Singh accused Canada’s government of attempting to pander for votes.

“It is obvious that Trudeau had played safe in view of the upcoming elections in Canada, giving in to pressure within his country,” said Singh.

“The world cannot afford to fan extremism in any form, which is what the Trudeau government was effectively doing with such ill-thought moves.”

Majumdar claims that politicians risk the temptation of turning to single issue voters like extremist groups to mobilize vote banks.

“The facts are clear: This government appears to be self satisfied with disrupting a relationship with a key geopolitical and economic democracy, very much central to the Indo-Pacific order, for no reason except to placate this constituency,” Majumdar told True North.

Ever since Prime Minister Justin Trudeau’s disastrous 2018 trip to India, the Liberal government has been reeling from a broken relationship with the former close ally.

Most recently, the two nations’ governments butt heads once again after Trudeau commented on ongoing farmer protests in India.

“The protests in Delhi on India’s Republic Day weren’t peaceful, as Khalistani extremists in Canada purported. They were designed to instigate violence by becoming violent. The fact is not a single bullet was fired despite police coming under violent attack, that the Indian authorities deserve great credit for acting as a democracy should,” said Majumdar.