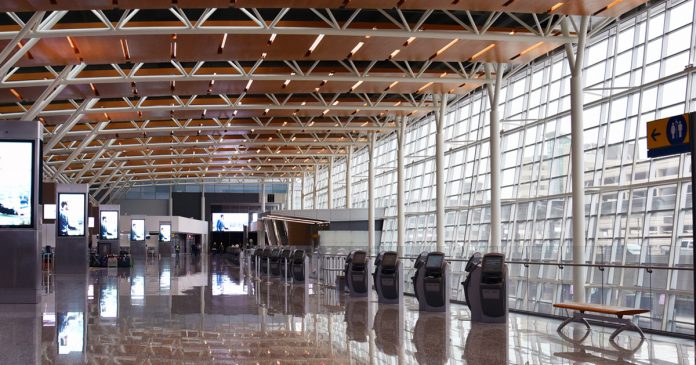 An Alberta man says his wife was forced to isolate in a government facility despite testing negative for COVID-19. Meanwhile, officials refused to tell her family where she was located.

Nikki Mathis was on her way home from a business trip in the United States when she was allegedly stopped by officials at the Calgary International Airport. Mathis alleges despite producing a negative COVID-19 test result, she was taken to a government facility to self-isolate.

“(My wife Nikki) arrived in Calgary tonight and when she got there she was greeted by a Police Officer and an (Alberta Health Services) official,” wrote Nikki’s husband, Chris Mathis.

“They rejected her results and told her she needed to go immediately to an isolation facility. She was told if she resisted she would be arrested. She called me, and I immediately asked to talk with the officer. I talked with both a police officer and the AHS official, they reiterated what she had said to me.”

“I asked for the address of where she would be, they said they could not give me the location address as it was confidential.”

AHS disputes this account in a statement, noting it has “no authority or responsibility for detainment and is strictly a “health care delivery organization.”

“AHS has no involvement in travel restrictions or enforcement measures related to mandatory quarantine,” the agency said. “Requirements, including isolation orders and public health orders for travellers entering Canada through Alberta are set out by the Federal Government and enforced by the Canadian Border Services Agency (CBSA) and the Public Health Agency of Canada.”

Nikki Mathis wrote on Facebook Friday night that she was finally allowed to leave the facility after two additional tests came back negative. Authorities told Mathis that despite the results, she was not allowed to leave until Saturday morning.

The Justice Centre for Constitutional Freedom announced they were taking immediate legal action against the federal government, calling for Mathis’ release.

“This incident goes against everything that makes us Canadians. We should demand far better from our government; to not even know where our loved ones are being held is a both a breach of government trust and a massive instance of state overreach.”

Trudeau and Dr. Tam also announced that “security contractors” will enforce quarantine rules in 35 Canadian cities. Flights to and from Mexico and the Caribbean have also been banned.

Update: This story has been updated to include a response from Alberta Health Services.