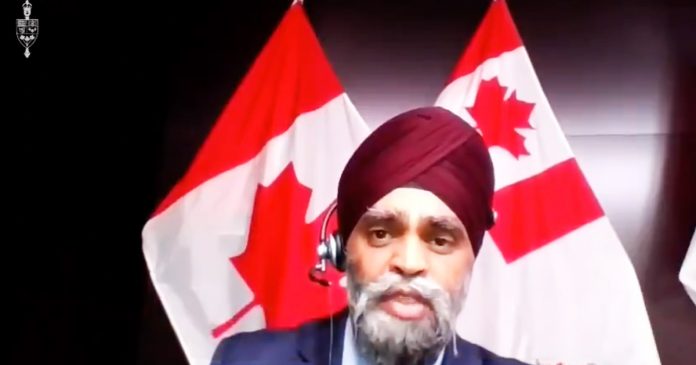 Liberal Defence Minister Harjit Sajjan squared off against the defence committee on Thursday regarding his handling of ongoing sexual misconduct accusations against retired general Jonathan Vance and other senior military officials.

Throughout the hearing, Sajjan maintained that as an elected official he had the duty to not get involved in the investigative process despite being on the highest rank of military command.

“When it comes to investigations, I haven’t conducted investigations. I made that call at that time and it was the right call, not to intervene with an investigation but making sure that it was followed up by the appropriate authorities,” said Sajjan.

“With respect minister, the Defence Act does give you the responsibility and you said that you couldn’t use a board of inquiry because it would have involved potential criminal charges or potential code of service violations but when you hadn’t looked at the information you couldn’t possibly have known that,” said NDP MP and committee member Randall Garrison.

A prior testimony by the former military ombudsman Gary Walbourne revealed that he had met with Sajjan in 2018 to discuss the allegations against Gen. Vance but the minister swept the evidence away, refusing to see it.

“I did tell the minister what the allegation was. I reached into my pocket to show him the evidence I was holding. He pushed back from the table and said, ‘No,’” Walbourne claimed during a March 3rd committee meeting.

In response to Walbourne’s allegations, Sajjan disagreed with how the former ombudsman characterized their 2018 meeting. During a prior testimony, the minister also refused to disclose whether the pair had met and what the content of their meeting was about.

“I did meet with Mr. Walbourne on March 1st. At the end of a regular meeting with staff, Mr. Walbourne asked me to meet alone. A majority of this private meeting did not concern Gen. Vance […]. At the very end of this private conversation, Mr. Walbourne brought up concerns of misconduct involving the former chief of defence staff. He did not give me any details, I did not allow him to give me any details. I very purposefully respected the investigative process to ensure that it remained independent.”

Despite Sajjan’s claims, critics have accused the minister of not doing enough to address the serious nature of the charges against the former military official.

The Conservatives have since pushed to have Prime Minister Justin Trudeau and Gen. Vance himself testify before the committee in the coming weeks.

With regard to the allegations, the prime minister indicated on Wednesday that he had been aware of the interaction between Sajjan and Walbourne in 2018 but did not know about the details until it was reported in the media earlier this month.