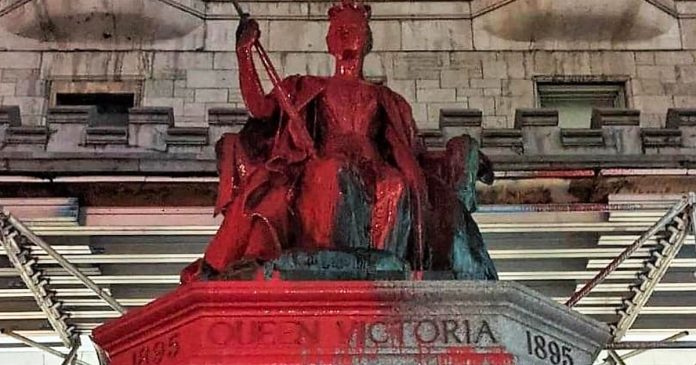 Members of a far-left group claiming to be responsible for a St. Patrick’s Day vandalism incident targeting McGill University’s Queen Victoria statue has issued calls for the royal family to be killed.

In a Facebook post taking credit for the incident, the group claimed that the actions were meant to shed light on the “criminal legacy of genocide, mass murder, torture, massacres, terror” and other things the extremist group claims the royal family has allegedly been responsible for.

“Just put the British Royal Family, all of them, into a limousine, give them a drunk French chauffeur, and let nature take its course,” said one member identified as Lakshmi O’Leary.

On August 31, 1997, Princess Diana and several others died in a tragic car crash after her vehicle collided with a wall in the Pont de l’Alma tunnel in Paris, France.

True North reached out to McGill University to ask whether an investigation had been launched into the incident but did not receive a response in time for publication.

The Facebook post by the group also references another vandalism incident in 2020 when a group of far-left extremists toppled and decapitated a statue of Canada’s first prime minister Sir John A Macdonald in Montreal.

“We do regret that we were unable to topple the statue tonite, as those cool kids did back in August 2020 to the John A. Macdonald statue,” said another member identified as Sujata Sands.

In response to the statue’s toppling, politicians across the political spectrum condemned the move.

“We are a country of laws, and we are a country that needs to respect those laws even as we seek to improve and change them,” Prime Minister Justin Trudeau said in response to the incident.

According to the Canadian Security Intelligence Service, anarchist and anti-government violence is listed as an example of ideologically motivated violent extremism alongside ethno-nationalist violence, the incel movement and anti-LGBTQ violence.