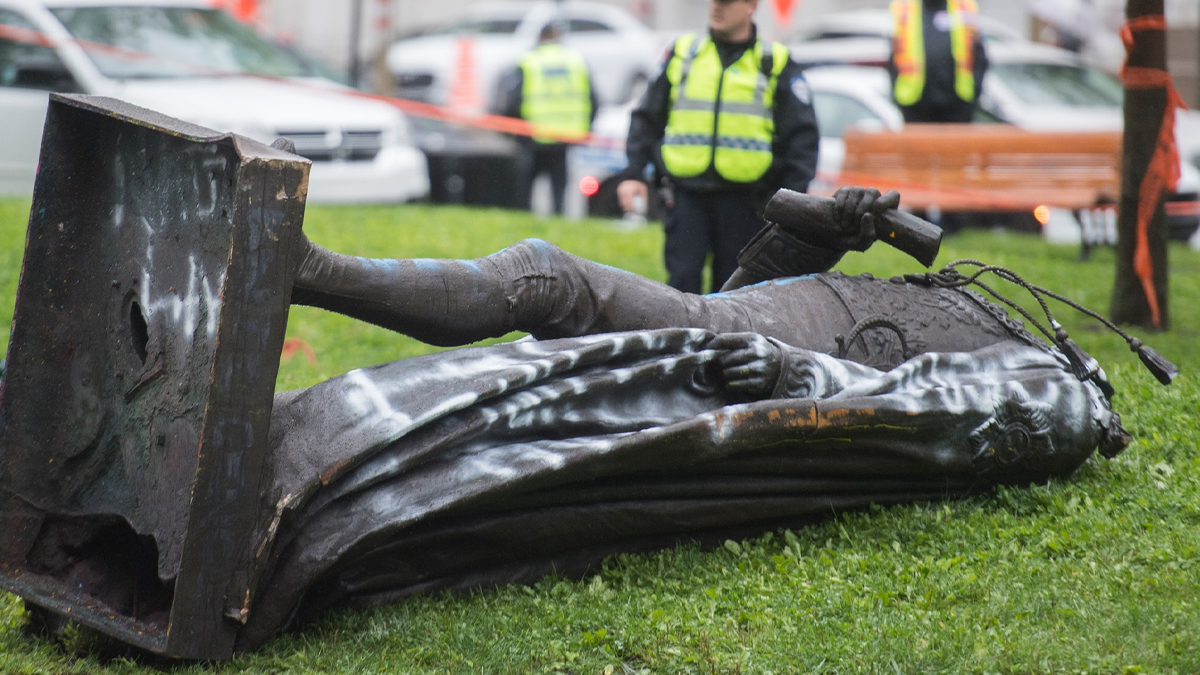 Over the weekend, radical protesters toppled and decapitated a statue of Canada’s first prime minister Sir John A Macdonald in Montreal.

As news of the incident broke out, Canadians responded to the vandalism with outrage.

Since the statue was taken down, several senior politicians have spoken out against the protesters’ actions.

Trudeau waited until a Monday morning press conference to address the statue’s vandalism. The prime minister told reporters that he was “deeply disappointed” with the actions of those involved.

On the very day the statue was taken down, the newly elected Leader of the Conservative Party of Canada Erin O’Toole spoke out against the incident.

“Canada wouldn’t exist without Sir John A. Macdonald. Canada is a great county [sic], and one we should be proud of. We will not build a better future by defacing our past. It’s time politicians grow a backbone and stand up for our country.”

Alberta Premier Jason Kenney also joined his fellow Canadians in condemning the radical actions of the protesters on Saturday. Kenney also offered to replace and house the statue in Alberta.

“A mob has torn down and defaced the statue of Sir John A Macdonald in Montreal. This vandalism of our history and heroes must stop,” said Kenney.

“Many of those on the extreme left responsible for this kind of violence claim that Canada is an illegitimate state, all the while enjoying Canada’s rights, freedoms, privileges and prosperity. None of those things were created by accident.”

On the day the statue was toppled, Premier François Legault also chimed in to condemn the vandalism, saying that he intends on the statue being restored.

Montréal Mayor Valérie Plante released a statement on Saturday saying that the statue’s vandalism was unacceptable.

“I strongly condemn the acts of vandalism that took place this afternoon in downtown Montréal, which led to the John A. Macdonald statue being torn down. Such gestures cannot be accepted nor tolerated.”

“Some historical monuments, here as elsewhere, are at the heart of current emotional debates. I reiterate that it’s better to put them in context rather than remove them. I am also in favour of adding monuments that are more representative of the society to which we aspire.”

NDP Leader Jagmeet Singh also addressed the incident on Twitter. Unlike other politicians who condemned the act of vandalism, Singh condemned Canada’s first prime minister instead.

“Sir John A. Macdonald was the first PM of Canada but he was also a key figure in the attempt to brutally wipe out Indigenous peoples. Taking down a statue of him doesn’t erase him from history any more than honouring him out of context erases the horrors he caused.”

Liberal Minister of Canadian Heritage Steven Guilbeault minced his words in a Twitter response to the incident, highlighting how public places should be “inclusive,” instead of condemning the protester’s actions directly.

“Our government has always stood with those who do not have a safe space to express themselves. While the current debate is important, we believe that dialogue is a better engine for progress than isolated acts of vandalism such as we are witnessing today.”

“Our government will continue to advocate for public places that are inclusive, safe and free from all forms of violence or harassment.”