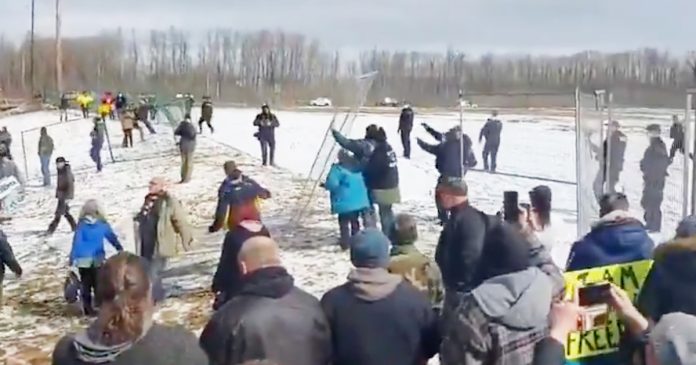 Hundreds of people gathered outside of Edmonton to protest the closure of a church that refused to follow lockdown rules.

On Sunday, hundreds of people met outside GraceLife Church to peacefully protest the government closure of a place of worship. The demonstration included a convoy calling themselves “patriots” that drove from Calgary to take part.

Videos posted to social media show dozens of police officers taking pictures of the protestors and stopping protesters from getting into the church.

In May, GraceLife Pastor James Coates was arrested after he held multiple services that violated Alberta’s strict 15% capacity limit for religious services. Coates was forced to remain in jail until trial unless he agreed to not hold services, which he refused.

In March, Coates was released after prosecutors dropped all but one charge against him.

While Coates’ trial is scheduled for May 3, the Justice Centre for Constitutional Freedoms, which is defending him, says the government is looking to delay the trial until July.

In a statement, GraceLife Church thanked Canadians for the immense amount of support they have received. The church noted that its members were not involved in the protest or destruction of the barrier.

“GraceLife Church appreciates the public outpouring of support to fully open churches in Alberta. GraceLife Church congregants were not at the protest that occurred on Sunday, April 11, 2021 near the church’s facility. GraceLife Church recognizes the place for peaceful protest within the context of a democracy,”

“Albertans have a constitutional right to assemble, associate, and worship. By taking the measures the government has, while the matter is still pending before the Courts, the Alberta Government has created an even more divisive situation.”

In a statement to True North, Alberta Health Services declined to comment on the protest, reiterating that they ordered the church to be closed after repeated public health violations.