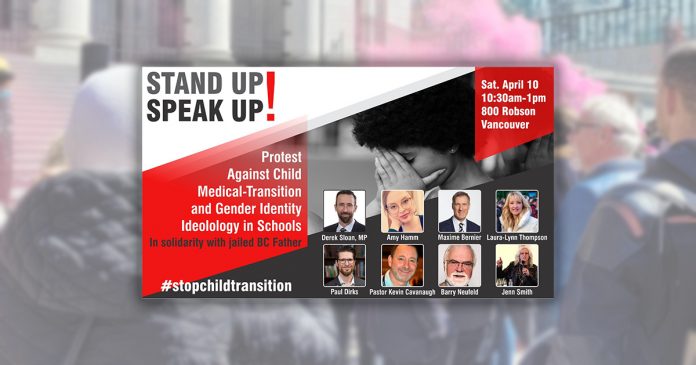 People’s Party of Canada (PPC) leader Maxime Bernier and independent MP Derek Sloan were two of the featured speakers at the “Stand Up Speak Up” rally in Vancouver on Saturday.

The event was organized to protest child gender transitioning in solidarity with the BC father known as “CD.” CD was arrested on March 16, 2021 and is currently in jail because he spoke out publicly against the medical transition of his 14-year old daughter and violated a court publication ban in doing so.

Chilliwack school trustee Barry Neufeld, who has faced backlash from his school district and the province of BC for opposing the “SOGI 123” gender ideology school program was another featured speaker.

“[CD] was ordered by the judge to lie about his child. This is the first time the court has ever ordered people to lie,” said Neufeld. “Although it is too late to save his own child from damage, we want to use his experience to warn other families as to what’s been happening.”

Other speakers touched on how youth who claim they are transgender are often autistic or same-sex attracted, and should not be encouraged to undergo a sex change operation when they are young, vulnerable, and not psychologically mature. Many of the attendees were also holding up signs in support of parental rights.

“How can anything but harm occur to children and youth when we, as adults, tell them that the bodies they are born in are wrong, and that they need puberty blockers, hormones, and surgeries to become their true selves,” said local feminist activist Amy Hamm.

Only 2% to 20% of children who claim they are transgender permanently stick with that identity. More than 80% of gender dysphoric children accept their biological gender by the time they are 18 so long as they do not receive “affirmation therapy” or puberty-blocking hormones.

Sloan stated the issue of ending child medical transition is important for people of many backgrounds, worldviews and faiths: “It’s not about left, it’s not about right. It’s about the truth. It’s about kids, and it’s about protecting those most vulnerable.”

Over 300 people turned up for the event, as well as approximately 35 protesters, a couple of whom attempted to disrupt the rally by blaring siren machines and yelling sexually explicit comments into megaphones. Another protester threw a handful of eggs into the crowd before being apprehended by police, and for the first half of the rally, several cars flying the pink, blue and white trans flag were circling the Vancouver Art Gallery and honking their horns repeatedly in order to drown out the speakers. (Interestingly, this quickly becomes background noise that is very easy to tune out).

One vocal trans activist protester pulled down her pants, bent over and screamed that she hoped her tampon string was visible. Another woman went around flashing her breasts to various individuals in the crowd.

But the rally speakers and supporters remained unfazed.

“We stand together – we stand because we love kids. Because we don’t want to see them cut off their private parts. Those things don’t grow back!” said the final speaker of the day, former PPC candidate Laura-Lynn Tyler Thompson.

“And so if you stay silent, and you watch this happen to somebody else, then that is not a loving thing to do.”