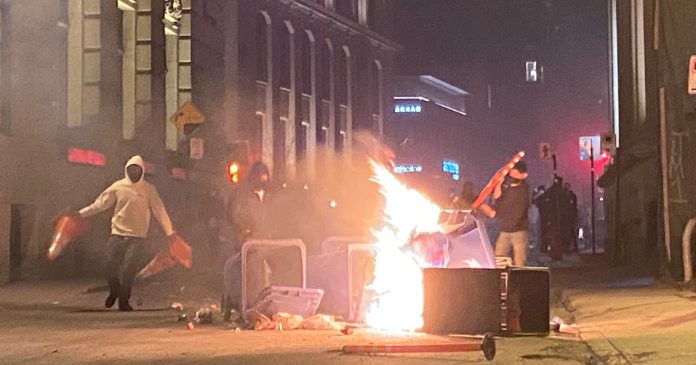 Over the weekend, reporters were arrested, a man was violently detained by police and hundreds of people took to the streets of Montreal to protest the Quebec government’s mandatory COVID-19 curfew and stringent lockdown regime.

What began as a peaceful protest quickly erupted into a night of vandalism and police clampdowns after a number of protestors broke off from the crowd to riot in the streets of Montreal.

Under Quebec’s current restrictions, people living in Montreal are currently under a red zone lockdown.

All residents are being told to stay in their homes from 9:30 p.m. to 5 a.m. unless it is for essential reasons such as healthcare visits, academic obligations, custody arrangements or walking a dog, among other exemptions.

“Police officers continue to ensure compliance with health measures and can intervene when individuals are outside their homes during curfew hours. Offenders are liable to fines ranging from $1,000 to $6,000 if they are unable to adequately justify why they are outside the home. Young people 14 years of age and over are subject to a $500 fine,” writes the official Quebec government restrictions website.

Members of the crowd chanted slogans like “freedom for the young!” and were confronted by riot police who fired tear gas on some of the protesters.

While out covering the lockdowns in Montreal, reporters from Rebel News were arrested by Montreal police. One video shows journalist David Menzies being placed in handcuffs and forced into the back of a police cruiser. Meanwhile, Rebel reporter Keean Bexte also claimed that he was handcuffed and later released by Montreal police.

According to the outlet, police attempted to raid an Airbnb houseboat being used as a base of operations by Rebel reporters. Police surrounded the property and created a perimeter forcing Rebel employees to remain on the premises.

Police report that no arrests were made but a report will be forwarded to the Crown Prosecutor’s office.

Rebel News founder Ezra Levant has since claimed that police did not have a warrant to search the property and he intends on suing the police department for their actions.

Photos and videos from the scene show several individuals using burning trash cans and safety pylons to form a barricade in the middle of a Montreal street.

As a result of the night’s events, police arrested a total of seven people involved in the riots. According to one business owner, the estimated damage to her business could total $10,000 as a result of the protests.

One video shared on social media over the weekend shows almost a dozen Montreal police officers violently detaining a lone man and punching him in the head as onlookers watched in disbelief.

Since the incident was shared online, Montreal police have indicated that they are looking into the video.

In a tweet posted early Monday morning, Montreal Mayor Valerie Plante condemned the actions of some of the protesters saying that COVID-19 restriction fatigue does not justify the destruction of businesses.

“The mayhem observed in Old Montreal last night is absolutely unacceptable. Fatigue linked to our fight against #COVID19 does not in any way justify the destruction of public property and failure to respect the rules. We must remain united and stick together.” said Plante in a tweet that has been translated from French to English.