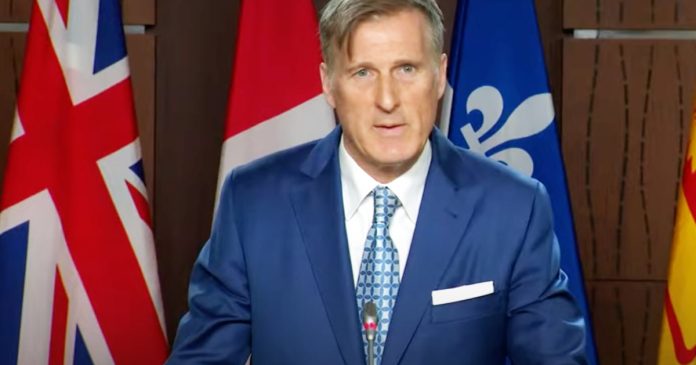 A group of anti-lockdown federal and provincial politicians says Canadians are being victimized more by government’s mismanagement of the pandemic than by COVID-19 itself.

End the Lockdowns Caucus members Derek Sloan, Randy Hillier, Maxime Bernier, and Pastor Michael Thiessen held a press conference on Parliament Hill Thursday morning, in which they called out the “series of failures” from federal and provincial governments for which Canadians are still paying.

“What we have seen from our government is a series of failures,” said Sloan, an independent MP. “The first was a failure to respond to COVID-19 at the beginning. While countries like Taiwan implemented travel measures against COVID-19 on January 1st of 2020, our public health authorities were calling them racist and ineffective for months after this time.”

Sloan pointed that Taiwan has had just 11 total COVID-19 deaths.

He went on to accuse the federal government of failing to protect the elderly, who are disproportionately vulnerable to the virus.

Sloan said the government has also failed when it comes to not bolstering research and information about preventative measures, such as vitamin D, which he said could have mitigated the panic government allowed to permeate.

“They did nothing to quell the fear that’s so rampant in our society,” said Sloan. “Every death is a tragedy but remember if we are creating more deaths than those we are preventing that is a greater tragedy.”

The press conference comes as provinces ramp up their own restrictions and Ontario’s government reportedly considers imposing a curfew.

Bernier, the leader of the People’s Party of Canada, said more politicians need to stand up for civil liberties as governments fight the pandemic.

“In the last thirteen months of restrictions the prime minister and provincial premiers have violated our rights and freedoms. We have been living with lockdowns and restrictions that have dictated every aspect of our lives for over a year. It was supposed to be a two-week measure to flatten the curve,” said Bernier.

“Never in the history of mankind has a country locked up its entire population to stop a virus. It is a failed experiment and Canadians are paying the price. We must reopen our economy knowing that Canadians under the age of 70 have a 99.95% survival rate among those infected with the virus.”

These comments were echoed by Hillier, an independent member of Ontario’s provincial legislature, who characterized the government response to COVID as Canada’s “greatest threat.”

The End the Lockdowns Caucus was first announced in February of this year through the organization LIberty Coalition Canada.

To date, the group counts over 50 current and former officials from municipal, provincial and federal levels of government.