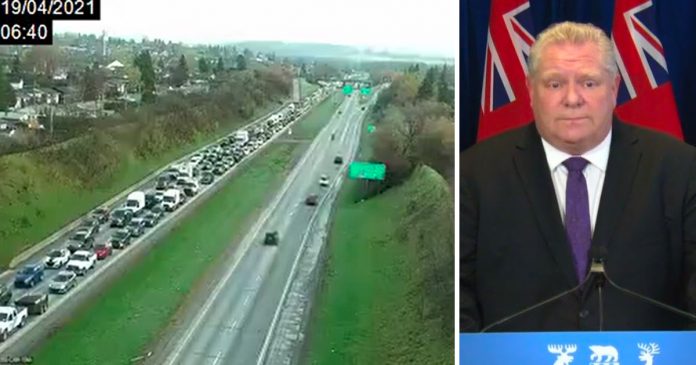 Traffic reports showed blockages as long as 10 kilometres long near Montée Paiement as well as hundreds of motorists struggling to cross the Macdonald-Cartier Bridge between Gatineau and Ottawa.

As of Monday, non-essential travel in and out of Ontario has been banned and police checkpoints have been instituted at the province’s border with Quebec and Manitoba. Canadians hoping to leave or enter the province must do so only for essential reasons which include:

Quebec’s public health measures also require anyone who enters the province to self-isolate for 14 days.

Since the early hours of the morning, police officers were present at the Champlain, Portage, Chaudière and Macdonald-Cartier bridges and at the Bourbonnais and Quyon ferries.

Premier Ford recently backtracked on public health measures which included giving the province’s law enforcement additional powers to stop and question people for simply being outside of their residences.

Soon after Ford announced the new spat of emergency measures, police forces across the province came out in opposition to the move saying that they do not intend to randomly stop pedestrians or vehicles as the Ontario government had asked.

“We will not be conducting random vehicle or individual stops. As before, our initiatives will be both complaint driven or proactive, with the goal of gaining compliance. Those that refuse to comply will receive the appropriate penalty,” wrote identical statements by both Niagara and Waterloo region police services.