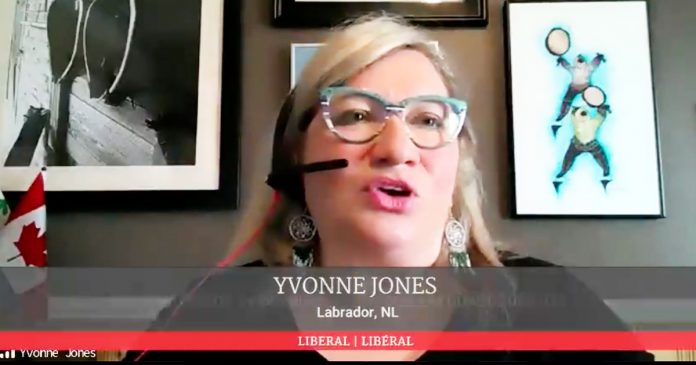 Liberal MP Yvonne Jones made a statement in the House of Commons Monday to demand an apology from NDP MP Mumilaaq Qaqqaq for tweeting Jones was “not an Inuk.”

“Jones is not an Inuk,” tweeted Qaqqaq on April 16.

Jones is the parliamentary secretary to the Minister of Northern Affairs and a member of Labrador’s Southern Inuit, NunatuKavut.

Addressing the House of Commons Monday, Jones accused Qaqqaq, who is Inuk herself, of committing “racial erosion” against her own culture. Jones also claimed that Qaqqaq’s tweets were “vicious and threatening” to Inuit.

“I stand before this House today to point out to the member for Nunavut that her domination attitude is the most prevailing one I have heard in some time. Her comments are laterally vicious and threatening to myself as an Inuk woman and the Inuit who are members of the NunatuKavut Community Council. As a descendant of Inuk and white parents, I was raised with a deep connection to the land and I continue to practice traditional ways of our people,” said Jones.

“Unfortunately, I have never seen such disrespect from another parliamentarian in my 25 years of political office. I ask the member to respect all Indigenous people in Canada and to apologize for her statement and stop committing racial erosion against her own culture. It is attitudes like hers that have set Inuit back decades in modern society. I expect an apology and a withdrawal of her statement on Twitter.”

Qaqqaq did not respond to a request for comment from True North by the time of publication.

As of 2019, the Canadian government has recognized NunatuKavut’s Indigenous rights and self-determination. A formal memorandum of understanding enshrined the group as being an “Indigenous collective capable of holding section 35 Aboriginal rights.”

NunatuKavut’s claims to Indigeneity have other detractors as well, including the nearby Innu Nation of Labrador.

According to an October 1, 2019 federal challenge, the Innu claim that the federal government “failed to discharge its duty to consult and accommodate the Innu of Labrador” when reaching the agreement with the NunatuKavut.

“The heart of this claim is basically the land and the rights of the Innu people. When we first heard that the NunatuKavut signed an MOU with Canada it was a surprise to us, because it affects our land rights negotiation with the federal government,” Innu Nation Grand Chief Gregory Rich told CBC News at the time.