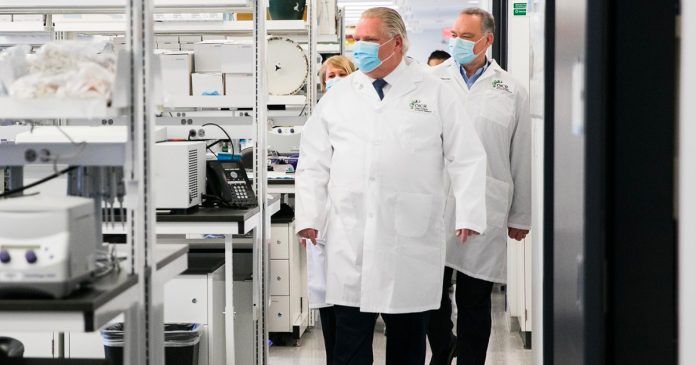 Publications like the Washington Post, CNN and even Alex Jones’ controversial daily program InfoWars jumped on the opportunity to criticize the premier.

In a scathing opinion article published in the Washington Post titled “Doug Ford must resign,” University of Ottawa political theorist David Moscrop delved into Ford’s botched police powers and how it impacted the vulnerable.

“Gaunt and drawn on Friday, he announced that his government was empowering police to arbitrarily stop anyone who is outside their residence during the province’s lockdown, giving law enforcement extraordinary powers that threaten civil rights, especially among vulnerable and racialized populations,” wrote Moscrop.

“Ford was never fit to be premier of Ontario. The pandemic didn’t reveal that; it just bathed it in the garish light of emergency,” Moscrop continued.

Prominent Ford government critic and Ontario physician Dr. Michael Warner also made an appearance on CNN to highlight the current situation in the province.

“A lot of healthcare workers are beyond angry, we’re just really forlorn that we’re in the situation that we find ourselves in,” said Warner during an April 18 appearance on the network.

“He’s like a giant demonic ferret. He looks like an evil hedgehog who just ate your freedoms. Well guess what? He just declared martial law, we played the clip earlier,” said Jones while an image of the premier appeared on the screen.

Premier Ford recently backtracked on public health measures which included giving the province’s law enforcement additional powers to stop and question people for simply being outside of their residences.

Soon after Ford announced the new spat of emergency measures, police forces across the province came out in opposition to the move saying that they do not intend to randomly stop pedestrians or vehicles as the Ontario government had asked.