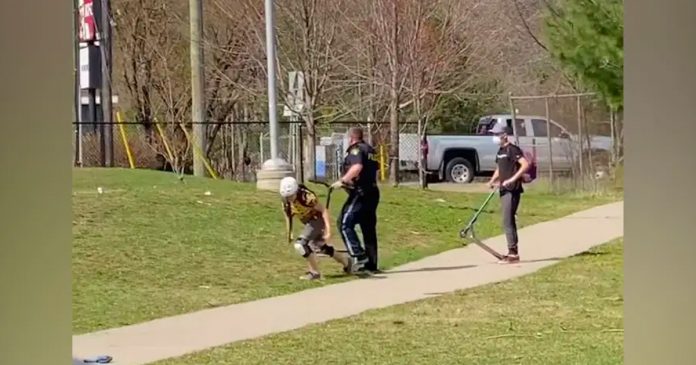 Police in Ontario say the province has given them the power to ID anyone gathering in public – even if they are children.

“If [police] see something like that going on,” Peel Regional Police spokeswoman Const. Danny Marttini said of gatherings, “they would ask to identify all parties that are participating.”

A viral video shows an OPP officer pushing a young boy on a scooter to the ground in a skate park, days after the Ontario government shut down most outdoor recreational areas.

In the video, someone says the officer was demanding identification, also saying the pushed boy was only 12 years old.

“Generally speaking, the idea is to treat everybody the same that will engage, explain what should be going on, and then hopefully educate and then that should take care of it.”

Marttini did not comment on if the officers in the videos actually asked the child for ID.

Ontarians must be 16 years of age to qualify for a provincial photo identification card.

At the request of OPP Commissioner Thomas Carrique, Peel Regional Police have begun an investigation into the incident, with the officer in the video being transferred to administrative duties for the time being.

According to police, the children at the skate park were not wearing masks or socially distancing.

One of those powers was the ability to stop and question people who are outside of their residence, a power that was quickly rescinded after almost all police forces in the province refused to use it.