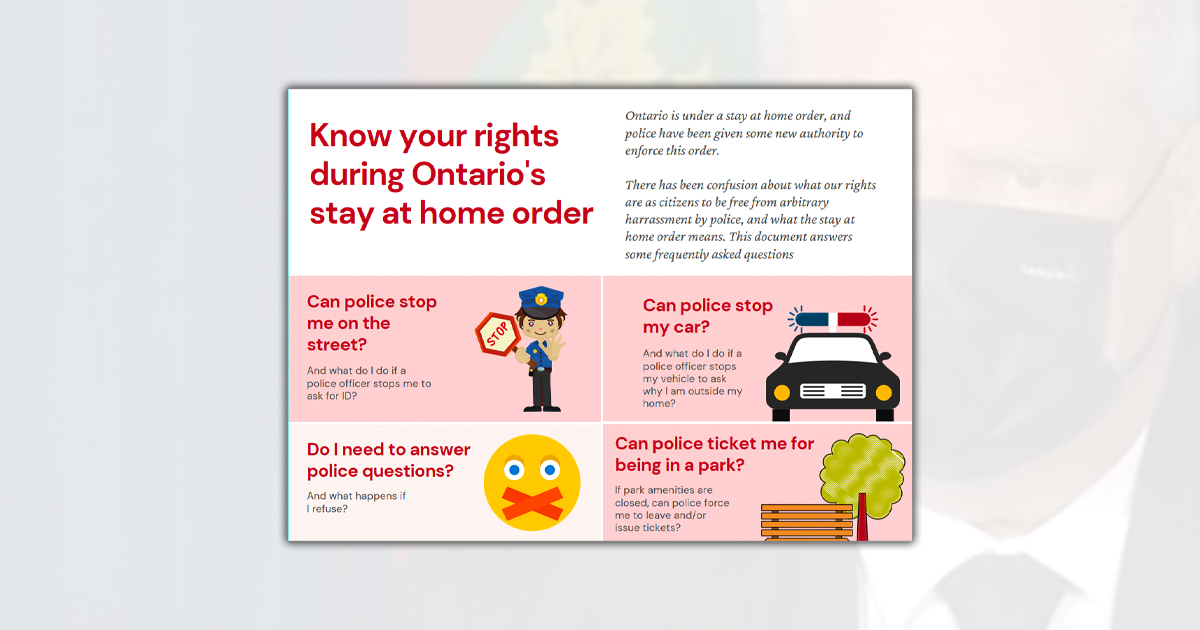 The Canadian Constitution Foundation (CCF) released a “Know Your Rights” guide for Ontarians who are confused about the province’s ongoing lockdown rules and stay-at-home order.

“This past weekend in Ontario has left many people uncertain about what powers police have to stop and question them during the stay at home order,” said CCF Litigation Director, Christine Van Geyn.

“We created the ‘Know Your Rights’ guide as a source of legal information for a public that has been provided with conflicting and unclear direction from the government.”

“Under the new, amended police power, police can demand information from individuals in certain situations,” the guide reads.

“Without a reasonable suspicion, police cannot stop you while you are walking on the street to ask for your ID or purpose for being outside. You can ask police what their grounds are to suspect you are participating in a gathering.”

The guide comes at a time when Ontario Premier Doug Ford is reeling from a massive public backlash against increased police powers he attempted to introduce as a means to combat the province’s COVID-19 crisis.

Immediately after the Ford government announced the powers last Friday, the CCF issued a statement condemning the move as a step towards a “police state.”

“Ontarians are essentially living under a 24 hour curfew and police will now be able to randomly stop people and vehicles and demand an explanation of why people are out living their lives. With these new police powers, Ontario is one step closer to becoming a police state,” said CCF Executive Director Joanna Baron in a statement on April 17.

This week, Ford issued an apology for the decision while the premier was in isolation after a member of his staff tested positive for COVID-19 earlier this week.