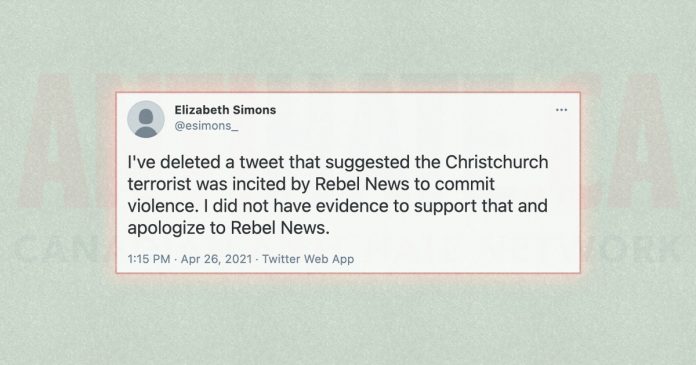 A deputy director with the Canadian Anti-Hate Network (CAHN) issued a public apology for falsely claiming that Rebel News had incited the March 2019 Christchurch mass shooting.

According to reports, CAHN’s Elizabeth Simons deleted a tweet alleging that the independent news outlet was an inspiration for the shooting and then issued a correction and apology for making the claim.

“I’ve deleted a tweet that suggested the Christchurch terrorist was incited by Rebel News to commit violence. I did not have evidence to support that and apologize to Rebel News,” wrote Simons on Twitter.

Simon’s account was only created in April 2021, the same month the apology was issued. The tweet also has the ability to reply disabled.

“She falsely accused us of terrorism. It took months for her to confess that she made it all up,” tweeted Rebel News Commander Ezra Levant.

“She’s a liar. Her apology is worthless.”

Recently, the CAHN received over a quarter million dollars from the Trudeau government as part of its Anti-Racism Action Program.

“This project will increase the organization’s capacity to counter online hate by hiring four team members to carry out the monitoring of extreme-right groups, report on their activities and file complaints with law enforcement; it will educate the public as to these groups and the damage they create, and will share information through its Facebook and Twitter followers,” wrote the CAHN grant description.

The CAHN has been accused by critics of formenting a view that Canada is a hotbed of hate and far-right extremism.

According to a letter presented to a House of Commons committee by the group, the organization described itself as “modelled after, and supported by, the esteemed Southern Poverty Law Center (SPLC) in the United States.”

Recently, the disgraced SPLC has had to deal with a number of scandals including being forced into a $3.3 million settlement after falsely labelling activist Maajid Nawaz and his organization as “anti-Muslim extremists.”

CAHN has also claimed in the past that around 300 hate groups exist in Canada, without being able to provide an example of a single one. The CAHN’s faulty claims have been further spread by NDP Leader Jagmeet Singh and several other elected officials.