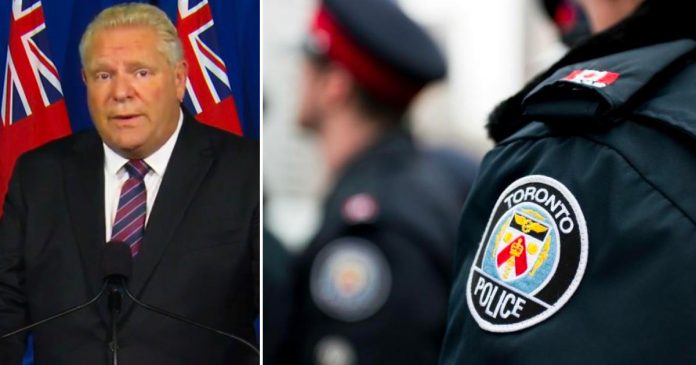 19 active and retired Ontario police officers have launched a notice of application with the Ontario Superior Court of Justice challenging the constitutionality of COVID-19 public health orders, particularly those that expand law enforcement powers.

The challengers are represented by lawyer and founder of the Constitutional Rights Centre Rocco Galati.

“Firstly, many of these regulations are not specific enough, they’re too vague and broad and aren’t clear enough to enforce uniformly and their supervisors think often wrongly what the regulations say,” said Galati during a press conference on Thursday.

“The second problem, that goes to the centre of the challenge is that as the applicants see it, many of these COVID measures force these officers to breach their oath. This is an oath that includes upholding the constitution.”

“When I saw this legislation coming into play, I questioned it immediately. There was no doubt in my mind that it was an outright breach of people’s Charter rights and freedoms. I swore an oath, I grew up and had every vision of being passionate about protecting those rights, that has never changed,” said Sgt. Evans.

The notice seeks to address the legality and scope of a number of COVID-19 public health orders including Ontario’s state of emergency declaration, lockdowns and stay at home orders, social distancing and mask wearing.

With regard to lockdowns, the application asks for a declaration that lockdowns and stay-at-home orders “are forms of martial law, the strict and exclusive jurisdiction of the Federal Parliament” as well as being “outside the province’s jurisdiction.”

A seperate part of the application seeks to address the enforcement measures police officers are being forced to comply with.

The application goes on to describe recent expansions of police powers by Ontario Premier Doug Ford to stop motorists and Canadians outside of their home as “unconstitutional and of no force and effect” violation the Charter rights to liberty and a right to remain silent.

Provincial border checkpoints are also included in the legal challenge.

True North reached out to the Ford government for comment but did not hear back in time for publication of this article.

On April 7, Premier Ford announced a spat of new lockdown measures meant to handle the province’s growing COVID-19 crisis including the increased police powers and border checkpoints. Soon after the announcement, police agencies across the province and constitutional rights groups slammed the Ford government for the draconian measures.

Eventually Premier Ford was forced to issue an apology for the decision, saying that his government had “got it wrong.”

“We moved fast to put in measures in place to reduce mobility, but we moved too fast,” he said.

“I know that some of those measures, especially around enforcement, they went too far. Simply put, we got it wrong. We made a mistake.”