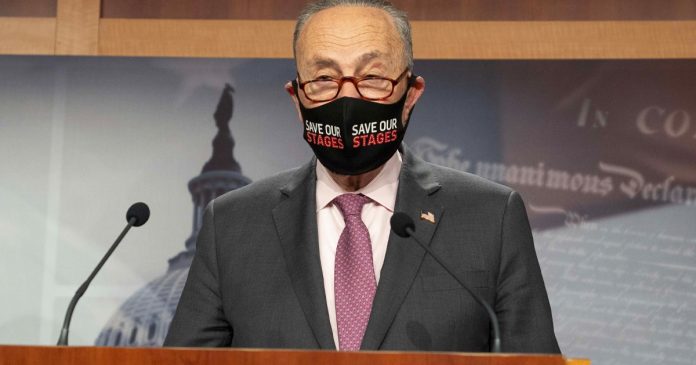 US Senate Majority Leader Chuck Schumer says the Canada-US border should open soon as residents of both countries suffer the effects of prolonged closures.

Originally reported by True North contributor Anthony Furey, Schumer travelled to the Massena International Airport in upstate New York this week to make his case for re-opening the border.

“The monthly extensions… have no rhyme or reason, they confuse people, they don’t let people plan, they frustrate thousands of western New Yorkers and Southern Ontarians, who depend on the border crossing.”

Prime Minister Justin Trudeau originally closed the border to non-essential travel on March 16, 2020 and has extended the closure each month since.

Earlier this week, Trudeau indicated that he was not interested in re-opening the border anytime soon, but added that he may consider reopening it in the summer “if everything goes well.”

“While at the beginning — and in the height — of the pandemic it was understandable for such drastic measures to be taken, we know much more about the virus than we knew in March of last year and are making strong gains against it,” he said.

“Since vaccination rates have risen, overall rates are steadily falling, and New York is ready to reopen, based on the data, it is time to take the first steps towards reopening the Northern Border to non-essential travel.”

Unfortunately, Canada drastically lags behind the U.S. when it comes to vaccinating Canadians. According to government data, as of April 30, 2021, only 2.55% of Canada’s population has been fully vaccinated with two doses of the COVID-19 vaccine.

In comparison, 32.3% of Americans are fully vaccinated, according to the Centers for Disease Control and Prevention.

Schumer is the latest to join the bipartisan chorus of U.S. politicians calling for the reopening of the border to normal travellers.

In April, Democratic Congressman Brian Higgins, who represents the cities of Buffalo and Niagara Falls, called for the border to re-open, noting that many families in border towns have been torn apart.