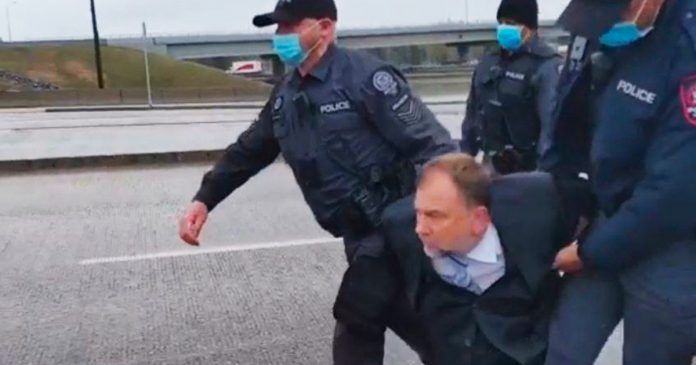 Imprisoned Alberta Pastor Artur Pawlowski and his brother Dawid were released on Monday after two days in a remand centre.

The two brothers were arrested on Saturday after they allegedly held a church service that violated Alberta’s public health orders.

Speaking to Rebel News, the legal counsel to the Pawlowskis Sarah Miller said the two men had their bail hearings Monday morning and are being released on condition.

“Pastor Artur Pawlowski and his brother Dawid have been ordered to be released from the remand centre, from their detention they have been under in excess of 48 hours,” she said.

The release was delayed by several hours, with Rebel News founder Ezra Levant being told they were held up by officers who disputed the text of the release order and the spelling of Dawid’s name.

As a condition of their bail, the Pawlowskis must comply with the previous health orders, including a pre-emptive injunction a judge granted Alberta Health Services to stop various gatherings and rallies that violate public health orders. Miller says the order already applied to all Albertans.

In a video posted to Facebook, Calgary police pulled over the brothers’ vehicle immediately after the church service. A large number of officers were seen in the video and police physically carried Pastor Pawlowski and placed him in a vehicle.

Artur Pawlowski is a longtime street preacher and the leader of the Cave of Adullam congregation in Calgary. He has opened his church multiple times in defiance of the province’s limits on in-person worship.

Miller noted that the timeline of the Pawlowskis’ imprisonment and release have been irregular as civil charges like those placed on the brothers rarely involve arrest.

Next Thursday, the Pawlowskis will have a hearing to determine if a contempt trial against the two brothers will proceed.