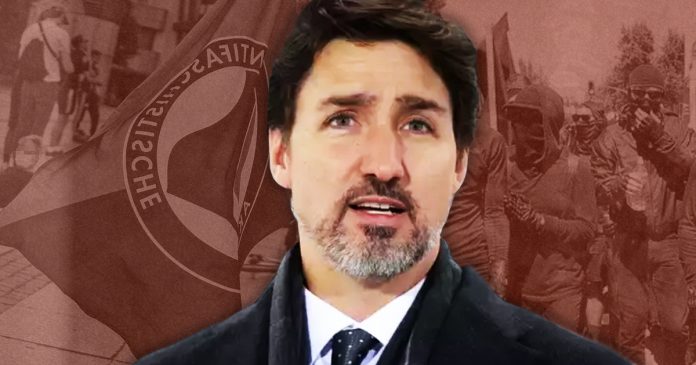 When does the left go too far?

University of Toronto clinical psychologist and public intellectual Dr. Jordan B. Peterson makes the point that our society needs a balance between left and right wing ideas. He also warns that both sides have the capacity to go too far.

This played out during the 20th century, when horrific acts of depravity characterized the far-right in Nazi Germany and the far-left under Stalin, Mao, Pol Pots and other communist dictators.

Our society today is acutely aware when the right crosses the line, according to Petersen, but we have a blindspot for acknowledging when the left goes too far.

“We’ve kind of figured out when the right-wingers go too far. Right-wing identity politics devolves into claims of ethnic and racial superiority,” said Peterson in a 2018 interview.

“When do the left wingers go too far? Oh we don’t know. Well, first of all we certainly know that they can go too far,” said Peterson, noting that those who ignore the far-left are either “woefully ignorant or you’re willfully blind.”

A perfect example of the blindspot for left-wing extremism appears to be the case in the Trudeau government’s compiling of Canada’s list of banned terrorist entities.

A government document obtained by True North shows that the Department of Public Safety did not provide any records whatsoever to the Minister on a long list of Antifa-affiliated groups who operate in Canada — this despite a long rap sheet of violence and incitement — when compiling its terror watch list.

Antifa openly calls for violence, although they disguise it in Orwellian language by calling it “direct action” or “self-defense.” Their violent rhetoric is given a platform by left-leaning journalists who treat them with kid gloves, give them fawning news coverage and downplay their intentions by calling them “counter-protestors” and “anti-fascists.”

In reality, Antifa operatives act like the fascists they claim to oppose. They dawn black masks to conceal their identities and have engaged in rioting, looting, arson, assault and even murder in cities throughout North America and Europe.

Canadian British journalist Chris Tomlinson has been covering Antifa for years and documenting their terrorists tactics. Last year, he reported on an Antifa guidebook that gave instructions on building bombs, sabotaging infrastructure and evading the police.

Here in Canada, Antifa and its affiliated groups have been implicated in a wide range of criminal activists, including bombings, assaulting police officers, destroying private property and uttering threats.

One of the groups listed in True North’s information request was Resistance Internationaliste, which claimed responsibility for a number of bombings between 2004 and 2010, with targets including an oil and gas executive in Montreal and a Canadian Forces recruitment centre in Trois-Rivieres.

Another group, Hamilton Against Fascism, has been involved in a number of violent attacks that have led to many arrests. In late 2018, ring-leader Cedar Hopperton pleaded guilty to mischief over $5,000 and counseling to commit mischief after he led a riot that caused significant property damage.

Yet neither of these groups were at all mentioned in the Public Safety documents.

Conservatives routinely condemn and disavow violent groups who subscribe to right-wing ideas, but Liberal and NDP politicians are rarely if ever asked to condemn left-wing violence. This allows violent groups like Antifa to act with impunity.

Earlier this year, the Trudeau government added 13 new extremist groups to the Criminal Code list of terrorist entities. The list included a number of groups that purport to operate on the far right, including neo-Nazi groups and the Proud Boys. A new section dedicated to “right wing extremism” was added to Public Safety’s report on the terrorist threat to Canada.

Meanwhile, there is no reference to Antifa or left-wing extremists associated with urban rioting and bombings. The term “left” appears zero times.

If the Trudeau government sincerely wants to crack down on domestic rioters and “ideologically-motivated violent extremism,” it absolutely must acknowledge that these groups exist on both sides of the ideological divide.

Instead, as the True North report shows, the feds are completely ignoring left-wing violence. As Dr. Peterson warns, Trudeau and company are either woefully ignorant or willfully blind.