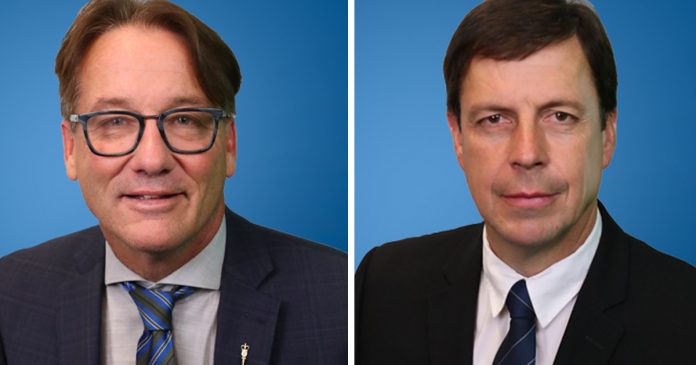 “Members recognize the need for government caucus to remain strong and united behind our leader, Jason Kenney, as we continue to fight through what looks to be the final stages of the COVID-19 pandemic and beyond,” Ellis said.

Loewen published an open letter Thursday morning announcing his resignation as UCP caucus chair and calling for Kenney to step down as premier.

“When the premier chooses not (to) listen to caucus, is it any wonder why the people choose to stop listening to the government?” Loewen wrote.

“Our supporters and those I represent can no longer tolerate this. These folks have not abandoned the principles and values of the UCP, but they have abandoned you specifically.”

While Barnes has never called for Kenney’s resignation, he has contradicted the premier multiple times in recent months.

Both Barnes and Loewen were among the 15 UCP MLAs who signed an open letter criticizing Kenney’s decision to implement another lockdown.

In another instance, Barnes and Kenney got into a very public dispute over whether Alberta should hold an independence referendum.

Speaking in an interview with 630 CHED radio on Thursday, Loewen said he was not trying to fracture the UCP, but added that he believes they could lose the next election if things do not change.

“The people are upset. They are leaving the party. We need to do what it takes to stop the bleeding,” he said.

“The majority of people I’m talking to, they want a strong UCP party. But they don’t see that they have that now. We need to have that so we can move forward and be able to form government in 2023.”