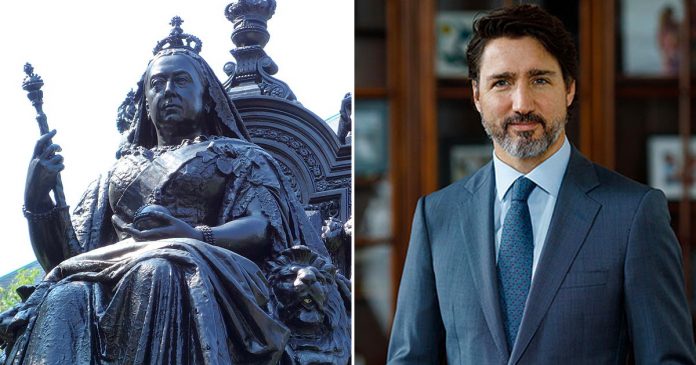 Prime Minister Justin Trudeau remained silent on Victoria Day as the former monarch’s name and legacy continue to get attacked in Canada.

Victoria Day, May 24, is not only Queen Victoria’s birthday, but also serves as the reigning monarch’s official birthday in Canada.

Last year, Trudeau had a phone call with Queen Elizabeth II, personally offering his best wishes for her the coming Victoria Day.

The PMO did not respond to a request for comment.

In recent weeks, Queen Victoria, Canada’s first monarch, has been attacked by activists for her role in early Canadian history.

Last week, True North reported that the Toronto District School Board is entertaining whether to strip the former monarch’s name from Queen Victoria Public School.

The school board suggests Queen Victoria has a “racist legacy,” saying that “some school names do not reflect the values of contemporary Toronto.”

Last week, a group of politicians proposed renaming the province of British Columbia, whose capital is named Victoria, to “reflect the diverse population of our Province.” The name for the province was personally picked by Queen Victoria 1858 when it became a colony.

During his term as prime minister, Stephen Harper put out multiple statements recognizing the importance of Victoria Day and the person who ruled the British domains from 1837 to 1901.

“Today, let us celebrate our rich and colourful heritage and, in particular, our enduring ties with the institution of the Canadian Crown. As an institution at the centre of our political system, the Crown and all Members of the Canadian Royal Family are an integral and valued part of our collective national identity.” Harper’s office wrote in 2014.

“Victoria Day provides us with an opportunity to honour Her Majesty for her steadfast loyalty to and affection for our country and all Canadians.”