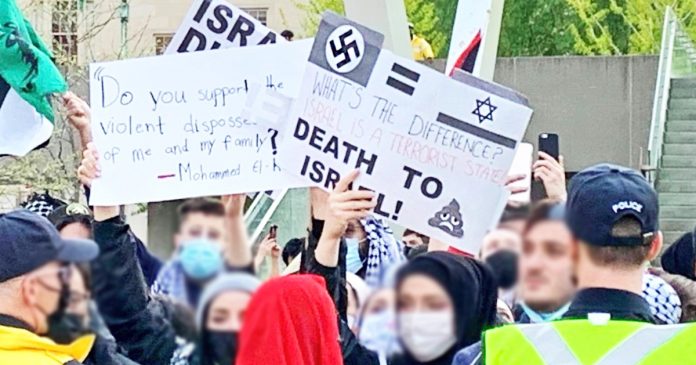 While the Israel-Hamas conflict reached a ceasefire, it has led to consequences outside of the Middle East, including in Canada.

As tensions continue to rise, many Jewish people in Canada have been victims of violence and a number of hate crimes.

According to B’nai Brith Canada, the number of anti-Semitic assaults recorded so far in May 2021 surpasses the total for all of 2020.

True North has compiled a list of some of the anti-Semitic incidents that have occurred in the last few weeks.

A Muslim cleric from Kitchener, Ont., allegedly accused Canadian politicians of serving Israel rather than Canada at a virtual event on May 8.

A Muslim cleric at the Islamic Humanitarian Service, Sheikh Shafiq Hudda, made these comments at an online al-Quds Day event amid a weekend of increasing conflict in Jerusalem.

Hudda said people should support the boycott, divestment, sanctions (BDS) campaign to fight back against the Zionist lobby.

True North reached out to Hudda to clarify his comments but he did not respond by the time this article was published.

Violence breaks out at pro-Palestine protest in Toronto – May 15

Pro-Palestine protesters clashed with pro-Israel supporters at Nathan Phillips Square in Toronto on May 15.

The Palestinian Youth Movement said in a press release that it was organizing protests in more than 25 cities across North America, including Toronto.

Pro-Palestine protesters allegedly surrounded pro-Israel protesters and threw water bottles, eggs and other objects at them.

Hundreds of pro-Israel protesters gathered in a Montreal square to express solidarity with the Jewish state.

Montreal police have taken possession of dangerous weapons after protests over the Israel-Hamas conflict took place on May 15.

Police made 15 arrests during the two pro-Palestine and pro-Israel protests that took place in downtown Montreal.

Police seized an ax, knives and cayenne pepper. Bottles containing a liquid similar to that used in Molotov cocktails was found. The liquid is being investigated to determine whether it was intended for incendiary weapons.

Various criminal acts, such as mischief, restraints, and armed attacks have also been committed.

Edmonton police have deployed its hate crimes unit to investigate after two homes were approached and anti-Semitic rhetoric was allegedly used on May 16.

The Jewish Federation of Edmonton (JFE) said there was a vehicle being suspicious as it drove around a west end neighbourhood. The young men in the vehicle said they were “seeking Jews,” confronting people and making threats.

The JFE notified Edmonton police and the RCMP about the episode.

Montreal police arrested two men for allegedly threatening members of the Jewish community in Cote Saint-Luc on May 17.

Police obtained a description of the suspects’ vehicle. A 19-year-old man and a 20-year-old man were arrested.

The hate crimes unit with Montreal police is further investigating this incident.

Cote Saint-Luc Mayor Mitchell Brownstein said in a Facebook post that there would be more police around synagogues and other Jewish community buildings in the next little while to prevent similar incidents.

Hamas flag flown at pro-Palestine protest in Toronto – May 22

A person waved a Hamas flag at a pro-Palestine protest in Toronto on May 22.

Hamas calls for a genocide against Jews in its charter. B’nai Brith Canada said such a display effectively makes Toronto a “no-go zone” for Jews.

“Acts of intimidation and targeted expressions of hate are reprehensible in our society, and we will continue to work with authorities to ensure the safety of our community in our country,” said B’nai Brith Canada.

Taliban flag displayed at pro-Palestine protest in Mississauga – May 22

A Taliban flag was displayed at a pro-Palestine protest in Mississauga on May 22.

The Taliban has called for Jews to be executed. It continues to target Afghan civilians and American soldiers, has committed cultural genocide, and oppresses women.

An educator with the Toronto District School Board (TDSB) has been placed under investigation after he sent an anti-Israel manual out to teachers.

According to the Toronto Sun’s Sue-Ann Levy, an educator at TDSB, Javier Davila, allegedly recommended a documentary and book about a terrorist, encouraged teachers to read books characterizing Israelis as murderers and thieves and gave advice on how to talk about the BDS campaign.

Davila, who identifies as a queer man, has a Twitter account filled with pro-Palestine and anti-Israel tweets.

Queer men can be sent to prison in many Middle Eastern countries. It is common for LGTBQ Palestinians to flee to Israel for safety.

A spokesperson for TDSB Ryan Bird said Davila will be investigated to determine if his comments and actions were hateful.