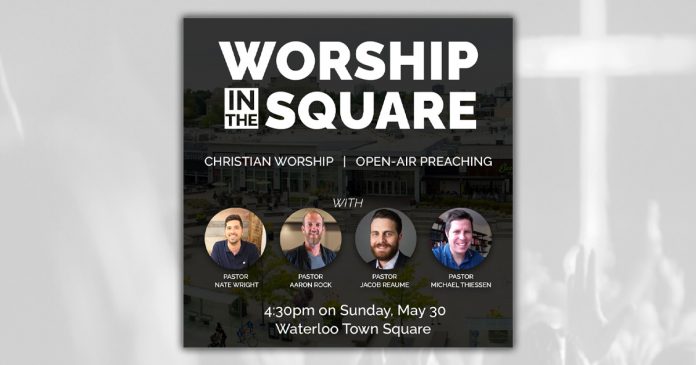 A group of Ontario pastors is taking worship to the streets.

The event is advertised as an open-air church service, with all four men offering to minister to attendees.

Three of the four have faced huge fines for presiding over church services throughout Ontario’s lockdown, with the provincial government succeeding in getting a court order to lock one of them out, Trinity Bible Chapel, of their building.

“We decided on this because we have been prohibited from leading services in our church buildings and we desire to maintain a public witness to the glory of Christ.  We also believe that people will be blessed by singing together, by praying together, and by exchanging warm greetings with one another in that context,” Trinity’s pastor, Reaume, told True North.

In Ontario, indoor and outdoor religious services have a gathering limit of 10 people.

According to the government, if the rules for gatherings are not followed, organizers may be fined $10,000 and each attendee may receive a $750 ticket. The government has also given enforcement personnel the right to break up the gathering and temporarily close the premises.

The pastors have been all critical of Ontario’s restrictions on religious services, with the men and their congregations making national headlines for defying public health orders.

“It is certainly an act of protest,” Reaume added.

“The emphasis of the time will be on Jesus Christ, His supremacy, and the free grace He offers to all peoples.  “

In early May, a judge ruled that Trinity Bible Chapel should be locked indefinitely, until public health orders allow it to operate.

In December, Rock, of Harvest Windsor, was charged for holding an in-person service that allegedly violated the Reopening Ontario Act (ROA).

In January, Thiessen of Grace Alliston was also charged under the ROA for holding an unrestricted service as a protest against public health orders.

Thiessen also organized and led a campaign to encourage churches to open for worship on Good Friday and Easter Sunday regardless of provincial restrictions. In total, 79 churches in nine provinces joined in his campaign.