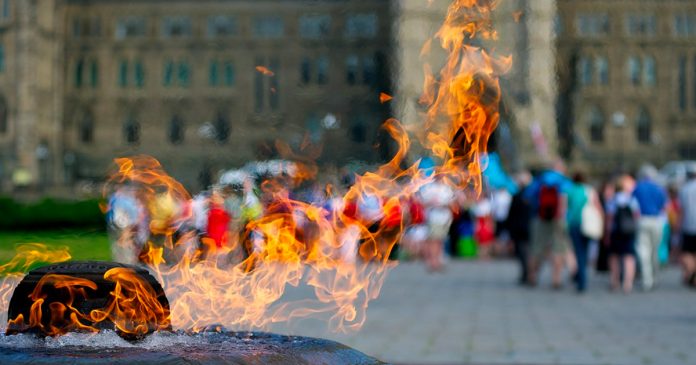 After decades of operation, the Centennial Flame on Parliament Hill will be replaced with a flame that runs on “carbon-neutral” gas.

First reported by Blacklock’s Reporter, the Department of Public Works recently disclosed that the natural gas fixture of the Centennial Flame will be replaced by one that runs on bio-methane. The change is currently underway.

The department says the flame produces 38 tonnes of carbon emissions per year. According to the Environmental Protection Agency, the average car produces 4.6 tonnes.

Despite the Trudeau government’s green agenda and implementation of a carbon tax, Canada’s emissions have increased every year since the Paris Agreement in 2016.

In 2019, Canada produced 730 megatonnes of carbon dioxide emissions, an increase of one megatonne over 2018.

The Centennial Flame has operated near-continuously since 1966 using natural gas. Every year, several thousand dollars are collected from coins thrown into the fountain below the flame and donated to charity.

The Department of Public Works says the fountain and bronze crests of the provinces and territories around it will not be altered, with only the natural gas fixture being replaced.

“The amount of natural gas used to keep the flame burning on average in the last five years was 105,364 cubic metres annually at a rate of 23¢ per cubic metre,” staff wrote.

“The amount of natural gas consumed annually, and the associated emissions, fluctuate from year to year.”

The Centennial Flame was first lit on December 31, 1966 to begin celebrations of the hundredth anniversary of Confederation.

“The flame should become the symbol of our first centennial year and should not be extinguished,” Then-prime minister Lester B. Pearson said at the lighting ceremony.

“Let the world know this is Canada’s year in history.”

The Alberta Roundup | Alberta takes Trudeau to court over plastic...

Alberta will join plastic makers in court challenge of the feds’...