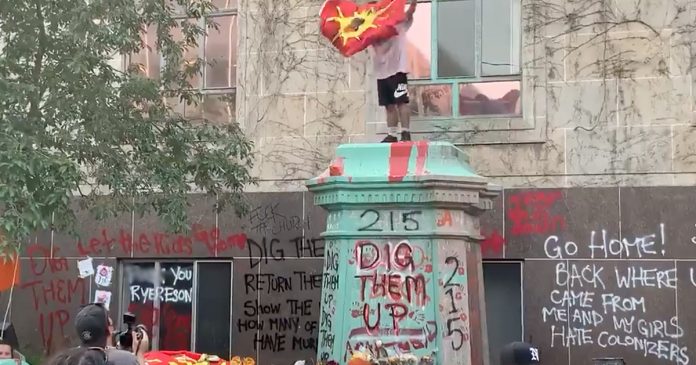 A statue of Ryerson University namesake Egerton Ryerson was toppled by protesters over the weekend.

Video posted to social media shows the moments after the statue was torn down, with a small group of protesters surrounding it. The statue of Ryerson and the area around it were defaced.

University President Mohamed Lachemi said the incident occurred shortly after a large protest in front of the statue on Sunday. Lachemi says the university will not replace the statue.

“A truck arrived on Gould Street and proceeded to pull down the statue of Egerton Ryerson. We are relieved that no one was injured in the process,” he said.

“The statue will not be restored or replaced.”

Police are currently investigating the incident.

Ryerson is one of several historical figures that have been targeted in recent days after the apparent discovery of remains at a former residential school near Kamloops, British Columbia.

Egerton Ryerson was a Methodist minister and educator who was instrumental in the development of the education system in Ontario. In 1847, Ryerson founded the Toronto Normal School on the site where Ryerson University now stands.

Ryerson is largely responsible for the development of Upper Canada’s education system, having supported free education for children, school boards and standardized textbooks.

Despite his successes, Ryerson is often considered to be a key figure of the residential school system as he wrote in favour of the concept decades before it was implemented.

Ryerson’s legacy has been targeted more than once. In 2020, Black Lives Matter and other activists in Toronto tried to get Ryerson University to topple the statue and take it away from campus grounds.

Ryerson University’s School of Journalism recently decided to change the names of its two publications to remove references to Egerton Ryerson.

Similar attacks have also been made in recent weeks against historical figures like Sir John A. Macdonald, Hector-Louis Langevin and Queen Victoria.