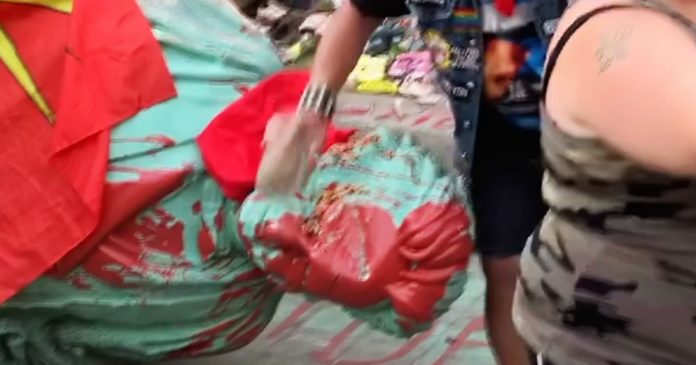 The student conservative group at Ryerson University is demanding action after a group of protesters topped the statue of university namesake Egerton Ryerson.

In a statement on Monday, Ryerson Conservatives condemned the school’s administration and police for not attempting to stop the toppling.

“On the 77th anniversary of D-Day – one of our nation’s most important and solemn days — the Egerton Ryerson statue that has stood for over 132 years was toppled by marxist vandals,” the statement reads.

“These criminals didn’t catch anyone by surprise. Their efforts were planned, publicized and noted by both the University and the Toronto Police before yesterday.”

Over the weekend the statue was toppled by protesters at the end of a large demonstration. Along with being desecrated, the head of the statue was apparently cut off and thrown in Lake Ontario.

University President Mohamed Lachemi has said the university will not replace the statue.

The head of the statue apparently turned up on Wednesday at an Indigenous protest site in Caledonia, Ont.

In a statement to True North, Ryerson Conservatives President Harrison Faulkner said that regardless of the club’s affiliation with the Conservative Party and the Ontario PC Party, the parties need to be condemned for their lack of action to protect historical figures.

“As the Ryerson Conservatives, it is our job to advance conservatism on our campus. That also means that we have to do what we can as students to conserve the identity of our university. Just because we are affiliated with the CPC and PC party, we must remain consistent and stand up to what’s happening on our campus,” he said.

“What kind of conservatives would we be if we just did nothing and watched the historical truth of our country be twisted and changed to fit a false narrative?”

In 1847, Ryerson founded the Toronto Normal School on the site where Ryerson University now stands.