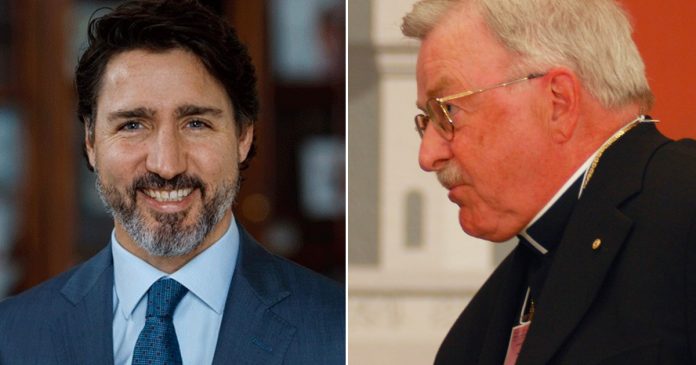 A Calgary Catholic bishop is speaking out against Prime Minister Justin Trudeau’s comments regarding the Church and residential schools.

Bishop Emeritus of the Calgary Diocese Most Rev. Fred Henry says the prime minister’s comments serve to deflect responsibility from the Canadian government.

Henry made the statements in an open letter to Trudeau.

“While acknowledging our own sorrow and guilt, and trying to own our sinfulness in the participation in residential schools, it is important to note the wording in our statement, especially the words, ‘participation in government policies,’” wrote Henry.

“Primary responsibility must be owned by the federal government.”

Since the apparent discovery of a suspected burial site near the former Kamloops Indian Residential School, the prime minister has publicly called on the Roman Catholic Church to accept responsibility for the incident.

“As a Catholic, I am deeply disappointed by the decision that the Catholic Church has taken now and over the past many years,” Trudeau said in a media interview.

Henry is not the only Church leader to publicly dispute the prime minister’s claims. Cardinal and Archbishop of the Archdiocese of Toronto Thomas Collins also labelled Trudeau’s comments as “unfair.”

“I think it’s much more helpful, as we’re all working on this long journey of reconciliation to work together, and not to be making these kinds of unfair attacks upon those who are trying their best to bring about and to work with all the Indigenous people for reconciliation” Archbishop Collins said.

In a recent appearance at the Ryerson Democracy Forum, Trudeau recounted a 2017 encounter with Pope Francis and lamented how the Catholic Church’s positions don’t line up with his and progressive views.

“I have to say as a Catholic, who, you know, is ever hopeful that the Catholic Church will come to terms with how for many Catholics our faith is really important to us but the distance we feel with the Church on many of its positions that don’t necessarily align with where we think we should be as a society, where we need to move forward,” said Trudeau.

“There’s always been a bit of a confliction for me as a person of faith with the Church but I continue to call myself a Catholic.”