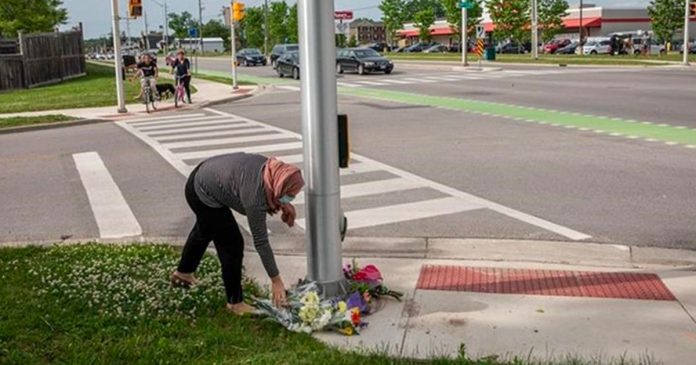 A man who ran over a Muslim family in London, Ont. earlier this month will be facing terrorism charges.

On Monday morning, 20-year-old Nathaniel Veltman appeared before a court in London. At the appearance, Federal Crown attorney Sarah Shaikh said that prosecutors have been allowed to proceed with terrorism charges.

Provincial Crown attorney Jennifer Moser said that she has also been cleared to proceed on charges already laid.

Veltman is already facing four counts of first-degree murder and one count of attempted murder in connection with the attack.

As Veltman did not have legal counsel at the time of his appearance in court Monday, the case was postponed until June 21.

On June 6, the Afzaal family was out for a walk when a pickup truck drove off the curb and hit them. Four family members died, including both parents, while the nine-year-old son was taken to hospital with serious injuries.

According to London police, Veltman deliberately rammed his truck into the family.

London police had previously suggested that the victims were targeted because of their faith.

“There is evidence that this was a planned, premeditated act and that the family was targeted because of their Muslim faith,” London Police Service Chief Steve Williams previously said.

Police have not found any connection between Veltman and known hate groups and believe he acted alone.

Since his arrest, new details have come to light suggesting Veltman may have been mentally unstable.

A previous CTV report, which has since been removed, described how Veltman was “medicated for mental illness,” with court documents from Veltman’s parents’ 2016 divorce suggesting that Veltman was “combative and argumentative” as a minor.