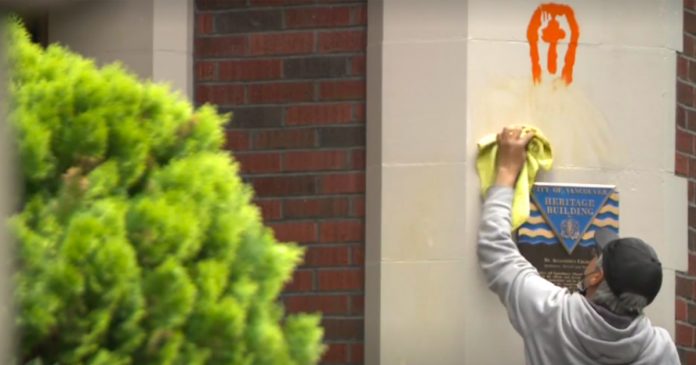 A Roman Catholic church in Vancouver, British Columbia was targeted by vandals over the weekend.

According to Global News, vandals spray-painted the words “killers” and “release the records” on the front doors of St. Augustine’s Roman Catholic Parish.

The anti-Catholic statements were made in reference to the apparent discovery of human remains near Kamloops Indian Residential School, which was managed by the Catholic Church while in operation.

“[We] are true followers of Christ. Please don’t blame the people of today for what happened before,” said Parishioner Maria Bastone.

A preliminary report on the findings is expected sometime this month according to local First Nation Tk̓emlúps te Secwépemc Chief Rosanne Casimir.

Prime Minister Justin Trudeau has been accused of sidestepping the federal government’s responsibility in the residential school system after repeatedly calling on the Catholic Church to apologize for its role.

“While acknowledging our own sorrow and guilt, and trying to own our sinfulness in the participation in residential schools, it is important to note the wording in our statement, especially the words, ‘participation in government policies,’” wrote Calgary Catholic Bishop Most Rev. Fred Henry last week.

“Primary responsibility must be owned by the federal government.”

This is not the first incident this month where a Catholic church was the target of vandalism.

On Sunday, a memorial to preborn children was toppled at St. Joseph’s Parish in Port Moody.

St. Joseph’s Rev. Mark McGuckin called the incident “disturbing” but said that he doesn’t know the vandal’s motivation behind the attack.

“It is disturbing for [parishioners] who wish to engage in this ongoing work of healing in a charitable way,” McGurkin told Tri City News.

“It’s a peaceful message there in honour of the pre-born, we welcome the engagement of dialogue.”

Other monuments and places associated with Canada’s residential schooling system have been targeted by vandalism and efforts to have them replaced since the Kamloops discovery.

Visit True North’s comprehensive map for a full list of all the places and statues leftists want to erase in 2021.