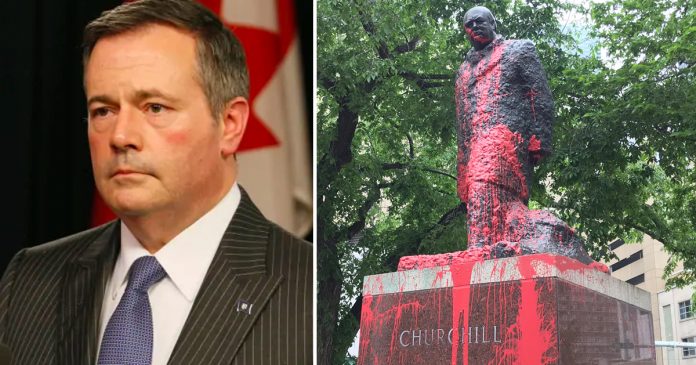 Alberta Premier Jason Kenney says historic figures should still be honoured if they don’t “meet the standards of contemporary wokeness.”

Kenney was responding to the defacing of an Edmonton statue of Sir Winston Churchill, the former British prime minister instrumental in the Allied effort to defeat the Nazis and fascism in World War Two.

The statue in front of Edmonton City Hall was found covered in red paint Thursday morning. The incident is being investigated by police.

In a tweet, Kenney called the vandalism “shameful” and argued that Churchill’s legacy needs to be properly recognized as “one of the greatest leaders of the twentieth century.”

“Churchill led the free world with heroic courage and skill to defeat global fascism in the Second World War,” Kenney wrote. “People should continue to debate Churchill’s complex legacy (and) record, but vandalizing public property like this is shameful. No member of the greatest generation can meet the standards of contemporary wokeness. But we should still honour those who secured our peace and freedom.”

The vandalism was also condemned by Edmonton Mayor Don Iveson, who said attacking a statue is not an appropriate way of expressing opinions.

“I don’t know the intent behind the vandalism, but I know historical monuments and sculptures, here and elsewhere, are at the heart of an emotional debate regarding what legacies and stories we venerate as a society,” he said in a statement.

“I believe there are more productive ways to move society along towards a more inclusive and uplifting future [than] vandalizing city property.”

In recent weeks a wave of hostility has been directed at historical figures after investigators suggested that 215 human remains are at the site of the former Kamloops Indian Residential School. While some have compared the discovery to genocide, the reality of what happened is not yet known.

Since the Kamloops discovery, statues of pivotal Canadian figures such as Sir John A. Macdonald and Egerton Ryerson have been removed or destroyed.

Earlier in the month, Kenney argued against the cancellation of historic figures, particularly Sir John A. Macdonald, saying that Canada can only grow as a society if we learn from the good and bad.