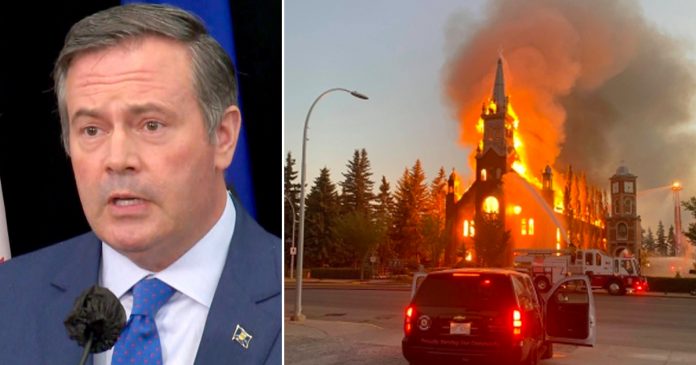 Alberta Premier Jason Kenney has strongly condemned the burning of multiple churches in the province and has promised funding for security.

Over the past few days, a number of churches in Alberta have been torched. On Wednesday, Saint-Jean-Baptiste in Morinville was burned to the ground. Earlier in the week, both the Catholic and Anglican church on Siksika First Nation land were burned.

In a statement on Wednesday, Kenney said that Alberta and Canada cannot tolerate attacks on places of Christian worship.

“The Government of Alberta unequivocally condemns recent arson attacks that have targeted Christian churches across Canada and Alberta,” Kenney said.

“Today in Morinville, l’église de Saint-Jean-Baptiste was destroyed in what appears to have been a criminal act of arson. This historic church was in the heart of Morinville and a key part of the spiritual life of Alberta’s Francophone community.”

In the past week, Catholic churches across Canada have been set on fire in what is believed to be retaliation for the church’s involvement in the residential school system.

Over recent weeks, hundreds of graves have allegedly been found at former residential schools run by the Catholic church. A report from the company doing the investigation at the first residential school in Kamloops was supposed to be released in June.

Prior to the Morinville burning, all of the churches had been on First Nations’ land.

“This is unacceptable in Alberta. It is unacceptable in Canada. These attacks targeting Christian churches are attempts to destroy the spiritual sites that are important to people of faith across Alberta, including many Indigenous people,” Kenney said.

“The Canada we know is not one where hate-motivated arson attacks targeting religious communities are common place or allowed to continue.”

To help protect churches and other sites, Kenney said the province is doubling funding for the Alberta Security Infrastructure Program from $1 million per year to $2 million. The program pays for security measures at places at risk of hate crimes.