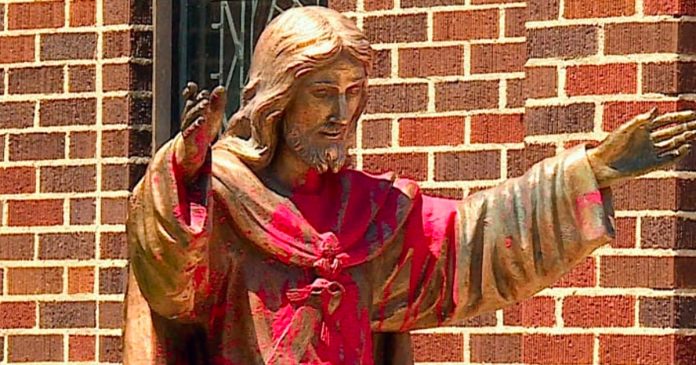 Calgary Police’s hate crimes unit is investigating after at least 11 churches were vandalized in the lead up to Canada Day.

Between Wednesday night and Thursday morning, churches across Calgary were vandalized with paint. In one instance, the church was broken into so paint could be thrown inside.

The vandals used paint to write various statements referencing the apparent discovery of unmarked graves found at former residential schools such as “215.” The vandals also targeted the church, painting phrases such as “charge the priests.”

At another church, a statue of Jesus was defaced with red paint.

The vandalized churches are:

In a statement, Calgary Police Services (CPS) went to great lengths to explain how they sympathize with the vandals, but added that attacking churches is not an acceptable response.

“We also all need to join together as a community to come to terms with our past and find a path forward to reconciliation,” the statement reads.

“Vandalism like this is not just illegal; it serves to create further division, fear and destruction in our city. We need to find the people responsible, both to hold them accountable and to prevent further divisive incidents.”

Over the past two weeks, churches across Canada have either been torched or vandalized as presumed-retribution for the Catholic Church’s involvement in the residential school system.

Earlier in the week, three churches in Alberta were victims of suspected arson, two of which were on First Nations land.

CPS’ hate crimes unit is investigating. Anyone with information on the vandalism is asked to call CPS at 403-266-1234 or contact Crime Stoppers.