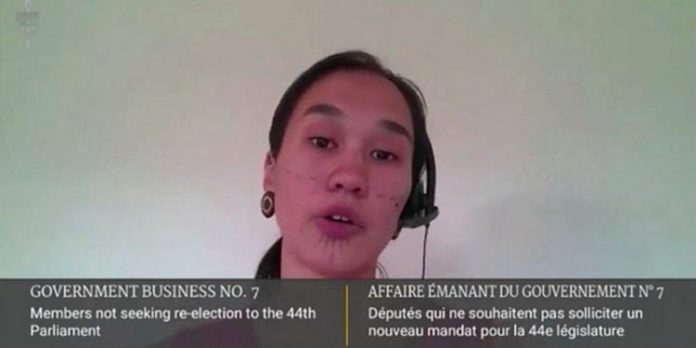 NDP MP Mumilaaq Qaqqaq claimed that an email from the Macdonald-Laurier Institute (MLI) that wished her a happy Canada Day was a form of “genocide denial” and a “racist dogwhistle.”

Qaqqaq made the statement on Twitter before going on a rant about how MLI should change its name.

In the email referenced by Qaqqaq, the MLI writes that “there are growing calls by a vocal minority to stop celebrating Canada Day (and indeed, Canada more generally).”

“We at MLI think this is wrongheaded; Canada is well worth celebrating, and the Institute makes every effort to show why every day,” the email states.

“We are a nation with a tradition of freedom that attracts people of all walks of life to come enjoy our society. We have, through stable and liberal political institutions, made our country one of the most successful in the world when it comes to economic, social and moral advances.”

Qaqqag replied, “This is not ok. Is a “vocal minority” code for Indigenous people? You are wrong btw There are millions of people wearing orange and refusing to celebrate this year. We aren’t going away.”

According to a Leger poll commissioned by Postmedia, 77% of people stated that Canada Day should not be cancelled this year.

Qaqqaq recently announced that she will not be pursuing re-election. In a farewell speech to the House of Commons, Qaqqaq claimed that she never “felt safe or protected” while in Parliament.

Qaqqaq also claimed that security jogged after her and “nearly put their hands on” her as an MP because of her race.

As exclusively reported by True North, Qaqqaq also came under fire in April after she raised doubts about Liberal MP Yvonne Jones’ Indigenous identity. On Twitter, Qaqqaq claimed that Jones’ was “not an Inuk.”

Qaqqaq eventually apologized to Jones over the incident.